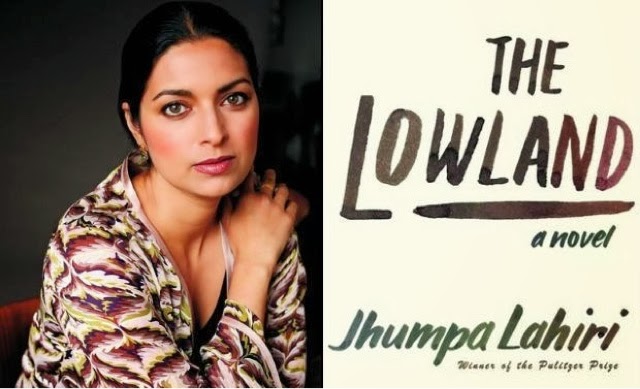 Jhumpa Lahiri was born in 1967. She is a member of the President's Committee on the Arts and Humanities, appointed by U.S. President Barack Obama.   She has a PhD in Renaissance Studies.
She is the author of four works of fiction: Interpreter of Maladies(1999), which won the 2000 Pulitzer Prize for Fiction; The Namesake (2003), adapted into the popular film of the same name; Unaccustomed Earth (2008); and The Lowland (2013), longlisted for the 2013 Man Booker Prize.  The Lowland has also been long listed for the National Book Award.  In 2008 the judges for the Frank O'Connor international Prize declared Unaccustomed Earth the winner, dispersing with a short list, saying that her collection was overwhelmingly the best.
There is additional background information on her in my prior posts.  I have read both of her short story collections.
The Lowland is a very good novel, fully worthy of both a Booker Prize and a National Book Award.  Like much of her prior work, the central characters are highly educated Bengali immigrants to the USA, in this case Rhode Island.  There are already numerous blog posts and reviews detailing the plot so I will not.   The novel covers sixty years or so in the lives of its central characters.   The characters are brilliantly developed.  It is about the power and pain of families, about immigration, about the love between brothers, about the impact of mothers, about trying to preserve your culture against the power of America.  There is a lot to be learned about Indian politics from this novel.
I loved it when the novel moved briefly to Ireland.  The Lowland is a step up from her powerful short stories, which is saying a great deal.   The prose is exquisite.
I think people will be reading The Lowland for many years to come.  I hope to read her first novel, The Namesake soon.