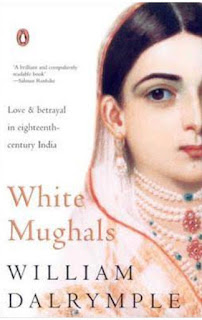 William Dalrymple is probably the leading non-academic historian focusing on India.  His White Mughals Love and Betrayal in 18th Century India won the highly prestigious Wolfson Prize in 2003 (awarded by the Wolfson foundation for best history book by a British subject).  As I am very interested in the 18th Century in Asia I was  eager to read this book.

British men, soldiers, East Indian Company officers in the thousands were sent to help rule India in the 18th Century.  Very few English women went along, at most the wives of the very elite.  Naturally this lead to extensive fraternization between Indian Women and British men.  Dalrymple focuses on relationships between high society Muslim India Women, mostly from the largely Muslim Hyderabad area and Englishmen. (The rulers were descended from the Mughals, hence the name.)

In several cases the men converted to Muslim, often required for a marriage, and became experts on Indian culture, often adapting the life style of their wives.  As depicted by Dalrymple, some of the matches were based in deep love, while other wealthy officers set up private harems.  By and large Hindu women were forbidden to marry Englishmen while Islam had no such provision.

Dalrymple goes into a lot of fascinating detail about social customs, trade, the British East India Company, marriage in the period, interfaith relationships, child rearing and much more.  I was fascinated to learn that Muslim law of the period allowed abortions up to the fourth month and to learn about how this was done.

There are things I found lacking in this book.  It gives little account of the day to day lives of the English, what did they eat for example.  One thing annoyed me a good bit.  Every woman mentioned by Dalrymple is described as incredibly beautiful.  To me this suggests the women were commodities and that their value came from how close they approximated British standards of beauty.  Clearly the lighter skinned a woman was, the more beautiful the English considered her.  Buying into this without comment is not acceptable,  to me at least.  In 18th Century society it was second and third sons who went to India in search of fortunes.

India in the 18th Century is an incredibly deep and wide area of study.  This book gets my endorsement for all into the history of Colonial India.

unusual period: i suppose the beginnings of the Great Game and the other political shenanigans are pretty well unknown... and hypothetically replete with riveting episodes....

Mudpuddle. The more I read the more I sense my infinite ignorance. Thanks as always for your comments, they help keep me going