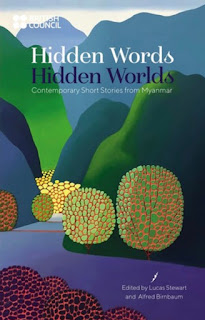 With current state of the World, it seems unlikely we can travel to Myanmar soon.  Thanks to Hidden Words, Hidden Worlds: Contemporary Short Stories from Myanmar we can at least vicariously experience this ancient, ethnically diverse and complex culture.  Of the fourteen stories in the anthology, several are in regional of tribal languages other than the dominant Burmese.

The central character in this story is a young man. Lin Yung, who writes and teaches short stories.  When we meet him he is lonely and bored with his life.  He makes a living, not much more than that as unlike his friends he has sought wisdom not wealth.

He is on a bus on his way to Hpa An, the third biggest city in Myanmar, center of Karin culture.  He has family there and thinks the area might give him some ideas for free lance articles. The bus ride was interesting and the depiction of the encounter with his hosts was very well done.  The food described served at the family dinner whet my appetite.

While there he teaches a class in the short story.  In the class he meets and becomes close with a young woman.  There impact upon one another is very beautifully crafted. 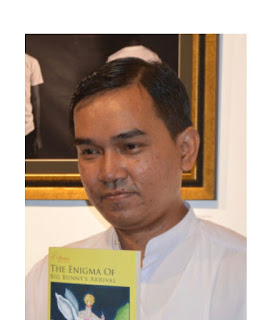 "San Lin Tun is a freelance Myanmar-English writer of essay, poetry, short story and novel and he has published ten books including “Reading a George Orwell Novel in a Myanmar Teashop and Other Essays” and his latest novel “An English Writer”.  His writings appeared in NAW, Poemish.com, Hidden Words/Hidden Worlds short story anthology, PIX, South East of Now, Asia Literary Review and Opening Up Hidden Burma. He worked as editor-in-charge of Learners’ English Educative Magazine, and a freelance contributor to Home and Services Journal and Myanmore. Currently, he is contributing his essays, and articles to Metro Yangon Section in Myanmar Times Daily” - author provided

I look forward to reading more of the work of San Li Tun.

first Burmese book i've heard of: sounds like a good one...

Thix is my first venture into Burmese literature also. I will read all 14 stories, focusing on stories by writers in tribal languages