Scapefish - A Short Story by Marc de Faoite - June, 2018 - Plus A Look at his exciting debut collection Tropical Madness 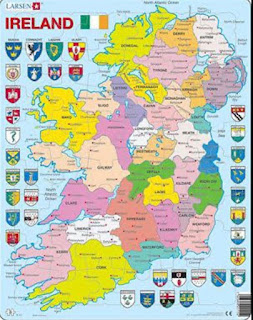 My full post on Tropical Madness by Marc de Faoite

Be sure to read his very interesting Q and A Session.  Marc, born in Dublin, has lived much of his life in Malaysia.   His Life experiences are very diffferent
from most Irish writers.  I enjoyed talking to him about literary life in the tropics.

Click HERE to read his Q and A Session

Website of Marc de Faoite.  Included are Links to several more of his Short Stories

I first encountered the work of Marc de Faoite during Irish Short Story Month in March of 2013.  After too long a hiatus, I am glad to be featuring his work once again this year. 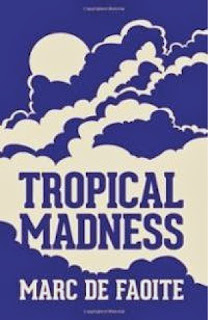 During Irish Short Story Month in March 2013 I posted on a marvelous collection of short stories,  Tropical Madness, by Marc de Faoite.  Here are my opening thoughts on it:

In talking about a collection of short stories (especially ones I really like such as Tropical Madness) I sometimes compare the reading experience to visiting a forest.  Most short story collections are like cold weather forests, forests out of deep rooted European memories.  I love tropical rain forests and I see a way to understand Tropical  Madness through this.  Many of the people in these stories ancestors lived for many generations in tropical forests, living from and in deep harmony with the land and with a love for old Gods and ways.  Now in modern Malaysia the rain forest is being cut for timber and to clear the land for industrial agriculture.  Young people do not want to live all their lives working a small plot of land and hunting and fishing.  They want and now have cell phones, IPads (or knock offs), they would rather work as a waiter or maid in a fancy hotel in Kuala Lumpur, maybe have a car one day and live in an air-conditioned place.  The appeal of western gadgets and luxury is hard to fight.  There is still beauty, and its friends, decay and  death in the rain forest.  For generations people from the forests worked as near slaves for colonial masters as rubber tappers, palm oil plantation workers and the women were the dusky beauties in the stories and novels of Joseph Conrad and Somerset Maugham.  Of course Christian missionaries and Muslim clerics tried to educate them away from their old folk beliefs that sustained them for centuries.  Now, based on TV commercials for MalaysianTourism shown on Manila TV, the country is marketing itself as a high affluence shopping paradise with exotic meals and beautiful beaches.  No mention is made of the teeming slums of the capital full of displaced forest dwellers or the squalor now found in forest communities where the young want out.  It is these people that de Faoite brings to life for us in his stories.  There is much to be learned about the very diversified ethos and culture of Malaysia in these marvelous stories.

”Scapefish  is narrated by a waiter in an upscale restaurant.  We learn he lives in a seaside town.  It seems we are on the west coast of Ireland.

The  opening lets us see into the psyche of the narrator, perhaps a bit to full of his own importance:

“I watched her serving wine at table nine, a Chablis, not the best on the menu, but an acceptable wine all the same, and well paired with the local oysters. She served a sample for the man to taste. When he nodded his approval she reached across and poured wine into the woman’s glass. She filled the man’s glass, the couple smiled and thanked her, she left the bottle on the table, and that was that.
Fourteen steps from table nine to the kitchen.
“Are you out of your mind?” I asked, as the door swung closed behind us. “How could you?”
“How could I what?”
She acted as if nothing had happened, as if she didn’t give a damn.
“I can’t believe you, really I can’t. This isn’t some two-bit diner.”
I’m not sure where the two-bit diner came from, probably late nights reading the Chandler novel some guest had left behind.
“What are you on about?” she asked.
“What am I on about? You always, always serve the wine from the right.”
I might have said ‘always’ a bit loudly, especially the second time. She shook her head and blew air from her nostrils.”

To the waitress, her work is just a job, the waiter embodies a man too occupied  by things very few care about.  He lives above a laundromat, he enjoys free heat for much of the year.  On his days off, he fishes from a long pier, getting much of his own food, besides what he gets free at work, in this fashion.  He has as far as we see no social life and for sure no woman.  An older isolated bachelor is a common figure in Irish literature.

We get a very good feel for working in the restaurant.

I think the waitress sees through him, and maybe feels a bit sorry for him.  She discovers that even though he lives next to the water, he has never been out on the sea.  Her father owns a fishing boat and she decided to take him on a short voyage.

Part of the fun and power of “Scapefish” is seeing the different ways the waitress and the waiter see each other.  One sees a potential romance but is afraid to act his impulse and the other would be aghast at the idea. 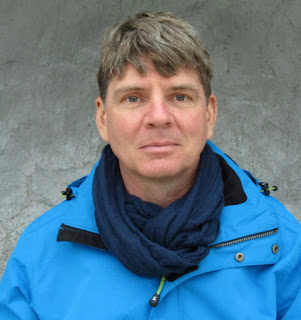 “I'm originally from Ireland. I left in 1989 and have never lived there since. Nowadays I live a simple, quiet and reclusive life on an island off the west coast of peninsular Malaysia.

My short stories and articles have been published both in print and online in Malaysia, Singapore, India, France, and Ireland. Tropical Madness, a collection of my short stories, was longlisted for the 2014 Frank O’Connor International Short Story Prize.

When I'm not writing, I'm generally busy doing other stuff, like reading, drinking tea, swimming, wandering around rainforests like a lost ascetic, or splashing about in waterfalls. I also spend a fair bit of time staring into the space behind my eyelids, or even the space beyond my eyelids.

Marc has worked on many projects with different writers and publishers. While not limited geographically, in addition to being a native English speaker his in-depth knowledge of Malaysia means that he is aware of the many social, political, and cultural sensitivities that need to be taken into account when writing in a Malaysian context.

Based on Seven years of contact with Faoite, i feel his services will be of great potential value to all sorts of authors.

enlightening post... humanity has not achieved a balance with the environment lately; i wonder what will happen when there are twice as many people on the planet? and no trees left...