My Q and A with Linda Lappin 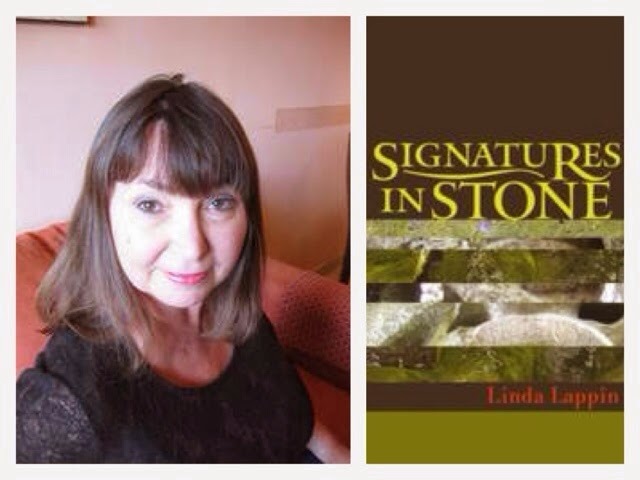 “Lappin has penned an intelligent summer mystery” – Library Journal
SIGNATURES IN STONE, a compelling tale of murder, art, sex and secrets set in Bomarzo, Italy in 1928 won the distinguished Daphne du Maurier Award for excellence in mystery and suspense writing. The award is named for Daphne du Maurier, the author of REBECCA, a suspense novel with romantic and gothic overtones and a precursor to today's romantic suspense. Winners were announced at the Death by Chocolate Party hosted by the Kiss of Death Chapter at the Romance Writers of America's national conference on July 24 in San Antonio, Texas.

"I am thrilled and honored to be the recipient of the 2014  Daphne Du Maurier Award. I am a great fan of her work which influenced my own. Her gift for eerie atmosphere and tenebrous characters has been an inspiration for me." Linda Lappin

In true Daphne du Maurier tradition, author Linda Lappin infuses SIGNATURES IN STONE with romantic and gothic overtones while invoking a strong sense of place and time.
“Deftly mixing fascinating art history and murder with an exotic atmospheric setting (the Bomarzo garden actually exists), dramatic historical period (1928 fascist Italy), and fully-fleshed characters, Lappin (The Etruscan) has written a hallucinatory gothic mystery in which no one is as they appear. Daphne is a most memorable, if a bit unreliable (thanks to her opium habit), narrator. Readers looking for an intelligent summer mystery will find much to savor here.”—WildaWilliams, Library Journal

Tennessee-born novelist Linda Lappin author of the small press classic, The Etruscan, takes on the mystery of Italy’s celebrated Monster Park in her new novel SIGNATURES IN STONE. The sixteenth –century  park, located not far from Rome, created by a Roman nobleman as a memorial to his wife, leads visitors on a journey through hell represented by its eerie sculptures of ogres and mermaids. Art historians are puzzled by its meaning: is it a pagan itinerary of initiation, a surreal illustration of its patron’s weirdest nightmares, an allegory for political events, or a series of emblems concealing an alchemical formula for making gold? And who was the real mastermind behind this complex creation? Was it, perhaps, as some scholars believe, one of the greatest sculptors of the Italian Renaissance?

Lappin takes this mystery in SIGNATURES IN STONE as the background for a compelling tale of murder, sex, and secrets set in Bomarzo in 1928, when four unlikely misfits find themselves entangled in the meanders of the park. Daphne, a mystery writer with a hashish habit; Clive, an American gigolo and art forger; Nigel, an English aristocrat down at the heels; and Finestone, a fly-by-night art historian, are thrown together in a dilapidated villa looked after by two Italian servants who are not what they seem. Each character will find a private hell hidden in the park, and not everyone will make it out alive. Through the deforming mirror of the Bomarzo sculptures, Daphne will face up to the darker sides of herself while solving a murder for which she has been unjustly accused. Unraveling one mystery, she unwittingly solves another: who designed the Monster Park and why. Perfect summer reading for a plane trip or the beach, SIGNATURES IN STONEis an “intense, fast-paced, eloquently elegant mystery novel,” showing how waking life, intuition, and dreams are much more interfused than we normally admit.

WHAT CRITICS AND READERS ARE SAYING ABOUT THIS NOVEL:
“I loved this novel! It's a rare balance between eerie and sense-making. Its main character is the spooky Italian landscape ofBomarzo and its Monster Garden of violent statues--which really do exist, the author tells us. But the 5 characters, including the engaging narrator, hashish-addicted Daphne, are as mysterious as the setting. Lappin's people are as dangerously compelling as her Italy. I look forward to a long, creepy series of Daphne mysteries.”  Nina Auerbach, author of Women and Demons, five-star review for Amazon.

“Lappin is a modern day Agatha Christie with prose that is like eating dark chocolate or sipping a glass of fine wine — the story continues to entice your senses and simply gets better and better the more you partake. Not one to hurry to the plot, she unveils the scenes piece by piece, character by character and leaves her own signatures for you to find along the way.” Vikki Walton I Love a Mystery

“Lappin lures the reader into the loins of Italy, describing it with a lust for its countryside and peculiarities as one might let on about a lover,” Shaina Mugan, Gently Read Literature.
“…Four eccentric traveling companions in an automobile to hell. SIGNATURES IN STONE is as brilliant as it is entertaining.” Thomas E. Kennedy, author of In the Company of Angels and The Copenhagen Quartet.
ABOUT LINDA LAPPIN    www.lindalappin.net

Linda Lappin, novelist, poet, essayist, and travel writer is the author of three award-winning novels. Her first, The Etruscan(Wynkin de Worde. 2004), a tantalizing suspense tale set in Italy in the 1920s, placed second at the New York Book Festival and was short listed for the 2011 Next Generation Indie Award. Her second, Katherine's Wish (Wordcraft of Oregon, 2008), based on the life of New Zealand writer, Katherine Mansfield, received the gold medal in historical fiction from the IPPY awards and was a finalist for the ForeWord Book of the Year Award in fiction. Signatures in Stone is her third novel. Upcoming projects include a memoir, Postcards from a Tuscan Interior, sections of which won a Solas Award fromTravelers Tales, and Genius Loci: A Writer’s Guide to Capturing the Soul of Place,a craft of writing book. She is currently at work on a new Daphne Dublanc mystery, Melusine, set in the Italian village of Bolsena, another site of Etruscan legends. She holds an MFA from the University of Iowa Writers Workshop and is a member of the Associated Writing Programs (AWP) and of the European Association for Creative Writing Programs (EACWP)

The Reading Life extends congratulations to Linda Lappin for winning the 2014 Daphne Du Maurier Award.  It has been almost a year since I first posted on her award winning mystery novel Signatures in Stone.  I want to make sure that as many of my readers as possible know about her wonderful novel so I am sharing again  my, edited for style, observations on Signatures in Stone.

I first became acquainted with the wonderful writings of Linda Lappin when I first read her highly rated novel based on the final years of Katherine Mansfield, Katherine's Wish.  I thought she captured with amazing perspicuity the persona of Mansfield and her complex personal relationships.  I vowed to follow her career and next read her very atmospheric, some felt it was apt to describe it as Gothic, The Etruscan,  a mystery set in Italy between the world wars.  I loved it for the prose and the perfectly realized central character.

I think Signatures in Stone is Lappin's best work to date, and that is saying a lot.  Set in the 1920s the central character, Daphne comes from Paris to overcome writers block and to clear her head from too much hash.  She arrives in Bomazo, Italy with her agent Nigel, allegedly an English aristocrat, who has been promising her an advance on the book she is supposed to be working for a while.  They  have booked part of an old run down villa.  Of course it comes with some mysterious servants. Nigel brought along his friend Clive, a sexual opportunist who ends up having an affair with Daphne, considerably older than he.  Also staying at the villa is an art expert, Dr. Firestone.  Dr. Firestone is there to direct the restoration of a garden called, "The Sacred Wood".  The heart of the story begins as we see Daphne become more and more fixated on the mysterious and sinister statues.   Italy was once seen in English literture, in the tradition of works by D. H. Lawrence and E. M. Forster among others, as an exotic almost exotic  tropical place where you could do things you might not be comfortable doing back at home.

Nobody is quite what they seem to be.  Everybody is out for everybody else, body, soul, and purse.
Daphne loves hash and Signatures in Stone lets us see how creativity sometimes feels like a hashish dream.

There is a murder with plenty of suspects. I was very taken up into the investigation of the crime.

Signatures in Stone is a fascinating book, deeply evoking the mysteries in the history of the garden of stones and beyond this Tuscan history.