Bolai- A Short Story about man and nature by Rabindranath Tagore - 1928 - translated from Bengali by Chaitali Sengupta and Aruna Chakravarti- January 14, 2021 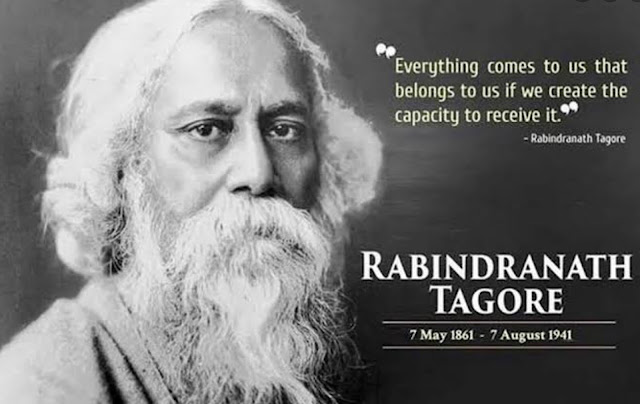 William Butler Yeats and his wife attended a series of lecturers Tagore gave in London.  Yeats was fascinated by Tagore.  Georgie Yeats was touched on such a deep level by Tagore that he appeared as a kind of spokesman in her automatic writing and this helped shaped the mature poetic vision of Yeats

There are now just over 3800 posts on The Reading Life, the nine posts i have previously done on a Short Story by Tagore are often among the top ten most viewed posts in a week.

I found this a very moving story about a Young man, living with his aunt as his parents have passed, who is deeply bonded with nature.  His description evokes ancient traditions:

“Even at an early age, he’d quietly observe Nature around him. The dark, billowing clouds in layers, on the eastern sky would collect and pour. They would moisten his heart and bring forth the untamed breeze of the forests. It was, as if, his entire being could hear the pitter-patter of the rain.

He seemed to want to fill his being with rays of the departing sun, perhaps, in an attempt to collect something precious from it. In the end of Magh (the month of January), when the trees would be laden with the tiny fruits, an intrinsic, deep happiness, a joy defying description awakened in him. His inner nature would blossom forth, expand and take on a deeper shade of colour, much like those flowering Sal trees, with the advent of Falgun (the month of February). In those moments, he had a deep urge to sit in solitude, in conversation with himself, piecing together the various tales he’d heard. Like the story of that very old pair of birds, who had made their nest in the deep crevice of the ancient banyan tree.  He never talked much, this wide-eyed, staring boy. In the silence of his being, his thoughts ran deep.”

“Bohai” would me a very good first Tagore.  I offer my thanks to Borderless Journal  for making it

possible to read this beautiful story.

I offer my thanks to  Mitali Chakravarty  for Publishing  this story

She is the founding editor of the Borderless Journal.

Mitali Chakravarty has been writing from the age of eight. She started her professional career as a journalist in The Times of India.  Her bylines have appeared in The Statesman, The Times of India, The Hindustan Times, The Pioneer, The Daily Star and more journals. Her poetry and prose have been published online and as part of numerous hardcopy anthologies. Some of her poetry has been translated to Nepali and German. Mitali also translates from Bengali and Hindi to English. She has published a humorous book of essays on living in China where she spent eight years, In the Land of Dragons . From borderlessjournal.COM

I took a long look at The Borderless Journal.   It already has lots of Short stories i hope to read and much more in just a few months of publication .

Here is their  Mission Statement

“Borders were drawn through history dividing mankind into smaller more manageable divisions that could be ruled and led. Borderless is a celebration of the human spirit that soars exploring and developing links beyond all the borders that exist in today’s world.

It is a literary journal to connect all writers and readers beyond the bonds of money, nationality, rituals and cultures… to a world of ideals. We look for any positive input — humour, poetry, prose. There are no boundaries to human imagination and thought and that is what we are set to explore”