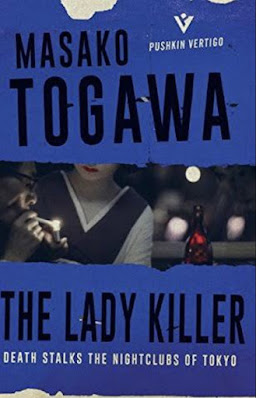 In 2019 during JL112 I read a very interesting mystery novel by Masako Togawa, The Master Key. I greatly enjoyed it and was very grateful to Pushkin Press for giving me a DCR of another of her works, The Lady Killer, also centered on a murder mystery.

Like The Master Key, the mystery in The Lady Killer  is so well done that I did not see the  ending coming but when it arrived everything fell into place.

The novel opens with what we think is an extract of a diary by man who seduces and then kills by strangulation women he picks up using false personas of various sorts.  The diary is called The Hunts Man’s Journal.  As the plot proceeds we see the man has no memory of Killing The women but he does recall having sex  with them.  When he learns of the deaths he begins to fear he might be a murderer.  The man is married but lives outside of Tokyo and see his wife, with whom he no longer has sex, just when he files home on weekends.  He begins to try to hide his activities and also fears someone may be trying to frame him for the four murders of women recorded in The Huntsman’s Journal.

There is very strong medical evidence linking him to the murders.  He has a very rare blood type found in only about one in a thousand Japanese and this is found on the Ginger nails of the victims or can be traced through semen.  On the basis of this, his insbility to give an

alibi  and some circumstantial evidence he is arrested for murder,  convcted and is sentenced to death.

His wife’s father is quite rich so he hires a private detective to try to prove he is not the killer.  There is a sininster woman with a prominent mole on her nose who seems linked the victims.  We are taken on a journey through the lives the lonely vulnerable women who wind up murder victims.  The detective is convinced the man has been set up in an elaborate plot.

The unraveling of frame up is just so inventive.

I enjoyed this book a lot.  The Kindle edition is value priced now at $1.95

In 2016, beloved Japanese crime writer and LGBT activist Masako Togawa sadly passed away. We’re delighted to be able to bring you her prizewinning debut novel The Master Key, originally published in 1962, as the latest in the Pushkin Vertigo crime series.

Masako went on to publish over 30 books and was described by the Times Literary Supplement as “The P.D. James of Japan.” She was as gregarious as she was talented, finding success in many different careers over the course of her rich and varied life. Here are some of her highlights:

Singer/songwriter: She made her singing debut in the well-known nightclub ‘Gin-Pari’ in 1954. Music and performing remained a big part of her life and she released several records including “Lost Love” in 1975 and “Bon Voyage” with her son Nero in 2015.

Club owner: In 1967, she decided to turn her sister’s coffee shop into a live music hall, calling it Aoi Heya, or “Blue Room.” The intimate 150-person venue in Tokyo’s vibrant Shibuya district hosted artists and composers, simultaneously serving as a Chanson club and a lesbian night club.

LGBT icon: After years of encouraging LGBT artists at Aoi Heya, she came out as bisexual on television in 1999. In 2002, she was one of the first Japanese television personalities to take an active role in the Tokyo Lesbian and Gay Parade.

Actress: From 1969 to 1974, she played the lead character in a television show called Playgirl about a mystery writer who creates an all-female detective agency specialising in white collar crimes. She also starred in a film The Hunter’s Diary (1964), an adaptation of several stories she had co-written.

Music teacher: In 2012, she started teaching Chanson classes, calling the programme the “Blue Room Grand Cabaret.” They proved highly popular, taking place on the first and third Wednesdays of each month and broadcast via web channel “Scatch TV”.

The story intrigued me and I added it to my list to read. It seems I already have her book The Master Key there. Probably recommended by you as well?