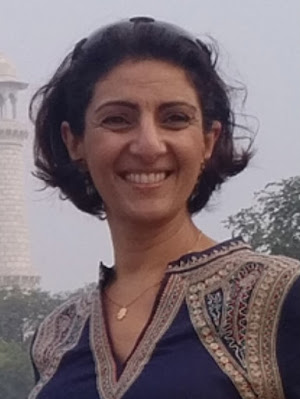 You may read today’s story. https://www.outofprintmagazine.co.in/farah-ahamed_a-man-of-talent

Gateway to Farah Ahamed on The Reading Life

I first began to follow the work of Farah Ahamed on  April 3, 2015.  “A Man of Talent” is the eighth of her short stories upon which I have posted. I reserve such coverage for writers whose talent and insight I greatly value.

Several of her stories are set in Nairobi, Kenya’s capital and deal with a wonderful character, Dr. Patel, of whom I have become very fond.

Here were my thoughts on first meeting Dr. Patel:

“In her "Dr. Patel" I see a masterful depiction of a man completely mired in a deep miasma of self-deception, unable to see how he appears to others, desperately seeking admiration. I will try to show how Ahamed creates a very real man in a well developed social environment in just a few pages.

We meet Dr. Patel on the way to a wedding reception of young man from one of the wealthiest families in Niarobi. I will catalogue his deceptions, of self and others.  Firstly he is not a doctor, either medical or academic.  It is just a title he sort of gave himself and thinks others call him that out of respect.  After twenty years working for Amber Investments he has become Human Resources director.  As anyone who has ever worked in the corporate world knows, this is a job normally reserved for time serving lackeys (W. B. Yeats would call him an errand boy).  Dr Patel is wearing his club tie, with the crest of an elite organization of which he is not a member.

Many of those at the party have inherited their wealth, Dr. Patel tells himself he did not inherit his position.  At the reception he sits at a table near the family, hoping others will take this as meaning he is a close family friend.  He got the groom a job at Amber Investments at the request of the father of the groom and was short sighted enough to request an "administrative fee" for this, thus reducing himself to a petty dishonest minion where honesty might have made him a true family friend.”

In “A Man of Talent”, just a delightful at times hilarious story, we find Dr. Patel facing three challenges.  He has been stooped for speeding in Nairobi by a very officious policewoman who takes away his license when, doing what is customary, he offers her a gratuity.  She tells him he must come down to the police station to retrieve it.  His visit is perfectly realized by Ahamed.  His superior upon his arrival at work decks him down because Human Resources department employees do not seem to know the regulations of the company.  When he then calls in his employees things get worse.

Anyone who has ever worked for a large rule bound corporation will strongly relate to all the depictions of happenings at the company.

I would suggest if possible you read her other Dr. Patel stories, all linked to in my prior posts, to really see what a great character Farah Ahamed has created.

Farah Ahamed’s short stories and essays have been published in Ploughshares, The Mechanics’ Institute Review, The Massachusetts’ Review amongst others. In 2021, Pan Macmillan will publish her non-fiction anthology on menstruation experiences in South Asia. A human rights lawyer with a Diploma in Creative Writing from the University of East Anglia, Farah is currently working on a short story collection and a novel set in Lahore. She also has a complete book of Dr Patel stories. You can read more of her work here: farahahamed.com.

I hope to follow her literary work for years to come and salute her human rights work.

These stories sound great. You've been reading them for such a long time, that it must feel like you are catching up on the gossip, when you run into your Dr. Patel friend after many months. :)

Buried in Print. That is very much How I feel.