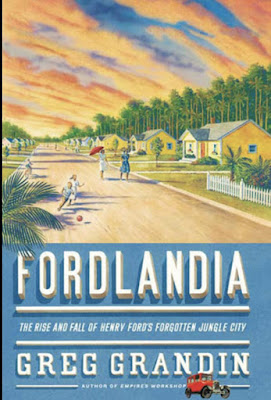 Nominated for National Book Award and Pulitzer Prize for History

Essential Reading for all into 20th Century American History

1928 - established Fordlandia on 14,268 square Kilometers in N. E. Brazil- the purpose was to produce rubber 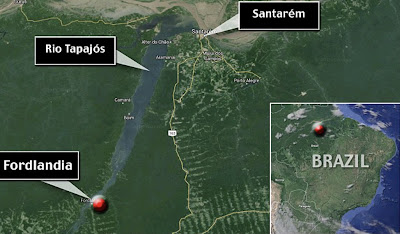 Nominated for National Book Award and Pulitzer Prize for History

Essential Reading for all into 20th Century American History

Fordlandia: The Rise and Fall of Henry Ford's Forgotten Jungle City by Greg Grandin gets my 2021 reading life year off to a wonderful start.  Grandin elegantly tells the story of Henry Ford’s riise from a mechanic, the child of an Irish immigrant,to

one of the richest people in the world.  We learn that Ford did not invent  the assembly line but perfected it.  He was the

first automobile manufacturers to produce a car millions could afford, the Model T, costing $850.00, buyable on credit, coming only in black.  Ford did pay very well, he wanted the best workers. Many African Americans moved up from the south to get a job in his factory.

Ford paid everyone the same but Grinder does say he gave them low skill jobs and did not advance them.  Ford turned his employees into cogs in his process.  No one was allowed to sit down.  As his work force topped 100,000 he began an internal security force which made sure there was no talk of unions.  Dissenters were at risk for physical harm.  He sent inspectors to employee houses trying to enforce a no drinking regulation.

I learned a lot about the development of The

automobile business.  Soon Ford had factories in many countries as well as franchised sales offices.Ford was a pacifist, very against Franklin Roosevelt.  As Japan expanded the international supply of rubber Ford needed was in danger of being curtailed.  He knew he had to do something.  Once WW Two began Ford did turn his factories to the war effort.

Grinder also goes a lot into the rubber industry.  Ford knew once rubber was grown only in Brazil but seedlings were smuggled out and rubber was grown more successfully in S. E. Asia.  Brazilian rubber tappers were normally in debt bondage to a local merchant.  It was very interesting to learn why rubber trees did better outside of Brazil.Ford, aided by a loyal management team, decided to revitalize the Brazilian rubber industry.  In order to do he acquired a huge parcel of land in N. E.Brazil, on rivers that were part of the Amazon system. We learn of the interactions of Ford’s representatives and the Brazilian government people, both sides wanted to personally profit.  Ford wanted to recreate a Michigan town, minus the bars,brothels, deep in the Amazon using as workers the people in the area.  Logistically it was hard to get supplies there as ocean going vessels needed to bring in requirements could only reach the area half the year.  Grinder goes into a lot of fascinating detail about the problems getting the workers, who were well paid, to accept strict regulations.  All sorts of side businesses sprung up to service the workers, including of course bars and brothels.  Often a Ford employee would bring his extended family with him.  Ford employees, many young single men, would often quit their jobs once they had enough cash to live a few months.  Ford tried to make employees eat in a company cafeteria

serving food very unlike home cooking.  Grinder describes a violent strike of Ford employees that required the intervention of the Brazilian army to restore order.

Grinder very clearly lets us see why the project was doomed from the start.

We learned of Ford’s mental decline, his troubled relationship with his only child Edsel

Grinder closes the book with a grim account of what Ford did to The Brazilian Amazon in cities like Manus.  Grinder convinced me that Ford helped turned people all over World into near corporate cogs and near slaves

Pulitzer Prize-winning scholar Greg Grandin has been appointed as the Peter V. and C. Vann Woodward Professor of History in the Faculty of Arts and Sciences.

Grandin, who holds a Ph.D. from Yale (1999), won a 2020 Pulitzer Prize in general nonfiction for his book “The End of the Myth: From the Frontier to the Border Wall in the Mind of America” (Metropolitan Books). The book explores the meaning of the frontier from the American Revolution to the presidential election of 2016. It was also a finalist for both the Pulitzer’s history category this year and the 2019 National Book Award.

The Yale professor is the author of seven books. His “Fordlandia: The Rise and Fall of Henry Ford’s Forgotten Jungle City” was a finalist for the 2010 Pulitzer Prize in History, as well as for the National Book Award and the National Book Critics Circle Award. He is also the author of “The Empire of Necessity: Slavery, Freedom, and Deception in the New World,” which won the Bancroft and Beveridge prizes in American history and was shortlisted for the Samuel Johnson Prize in the United Kingdom. His first book, “The Blood of Guatemala,” won the Latin American Studies Association’s Bryce Wood Award for best book published on Latin American in any discipline.

Grandin has co-edited, with Gil Joseph, “A Century of Revolution,” and, with Deborah Levenson and Elizabeth Oglesby, “The Guatemala Reader.” He has published widely in The New York Times, Harper’s, The London Review of Books, The Nation, The Boston Review, The Los Angeles Times, The New Republic, The Hispanic American Historical Review, and The American Historical Review, among other places,.

A graduate of Brooklyn College at the City University of New York, Grandin studied for his Yale doctorate studied under historian Emilia Viotti da Costa. He joined the Yale faculty in the fall of 2019, having previously taught at New York University.

Grandin is a member of the American Academy of Arts and Sciences and the Society of American Historians.”  From Yale University

Fordlandia: The Rise and Fall of Henry Ford's Forgotten Jungle City by Greg Grandin is a very powerful book.

All teachers of history, not just American history as Ford changed World, should read this book.

This sounds like essential reading: no wonder you're glad to have begun your new year's reading with such an informative volume. I've been to Dearborn just once, to the Henry Ford museum (it's a popular destination for school students to travel to in later years of school, even across the border into the U.S.) and you won't be surprised to hear that they emphasize different aspects of Ford's philosophy and practices there. ;-)

Wow, all news to me. Cheers