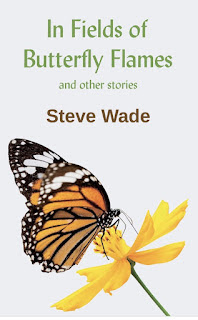 His debut collection can stand with the masters of the Irish Short Story.

This is the eighth  short story by Steve Wade that has been featured on The Reading Life.  The fourth from his debut collection.I first read his work during Irish Short Story Month Year Three in March of 2013.  I found his short story “The Land of the Ever Young” fully qualified to stand with the great occult fairy tales of Sheridan Le Fanu or Andrew Lang.

First and foremost 'The Land of the Ever Young" is a tremendous lot of fun to read.  Joseph Sheridan le Fanu or Andrew L)ang have no better stories than this.

The other  stories covered on The Reading Life show the extent and depth of Wade’s range. (Some of the stories can be read online at links found in my posts)

Today’s story way more than justifies my belief in the immense talent of Steve Wade.

Isabel’s husband of some twenty years recently told her he was ending their marriage.  She is on a train. A handsome younger man is looking at her, checking her out.  She cannot help but enjoy this.

“Isabel remembered this type of look from men. Almost. A look they pretended you weren’t supposed to notice but made quite sure you did. A look she couldn’t remember inspiring for years, not since before she and Don had yet to find each other. Long before Robert existed.”

She is being left financially secure, she gets the house and their son will get his father’s expensive German car, A BMW convertible.  Perfect to impress girls.  He decides to take it for a drive:

“A black BMW convertible. A gift from his father – what a gift. And he had just turned nineteen. The break-up between hismom and dad no longer seemed as crushing as it had been these past months. He climbed down the gears at the sight of a couple of women wheeling strollers in the distance. Always worth a look. Bingo. Yummy-mummies. That’s when the moron in the Golf whizzed past.”

In just a few moments, the gift of Robert will destroy four lives.

In this brief work Wade shows us how fragile life can be.

The closing is one of horror and heartbreak, years of hoped for happiness gone.

The work of this author sounds riveting. Terrific review, Mel.

Suko, thanks as always. Stay safe