"Nip the Buds, Shoot the Kids" by Kenzaburo Oe 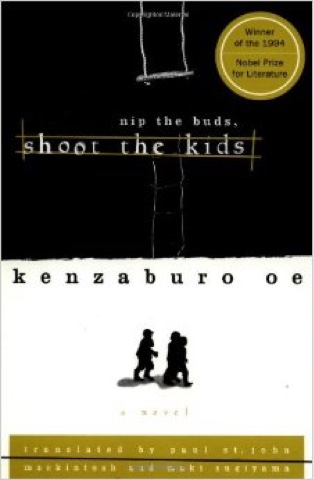 Nip the Buds, Shoot the Kids by Kenzaburo Oe is his  first novel, written  at age 23.
(1958, translated from Japanese by Paul St John Mackintosh and Maki Sugiyama in 1985, 189 pages)

Nip the Buds, Shoot the Kids was the first full length novel by Oe that I have read.   Prior to this I posted on four of his novellas, his non-fiction work Hiroshima Notes and
I posted extensively concerning the stories in his collection of works by other writers, Crazy Iris and Other Stories of the Atomic Aftermath.  I have already placed Oe on my "read everything they have written tbr list".   As I started my first read of one of his longer works I did fear that perhaps my reaction to his shorter works would not be carried over to his longer ones.   My fears were very much misplaced.   Nip the Buds, Shoot the Kids is a wonderful novel, not just a wonderful first novel.   We are never told when or really where the story is set but it is clear that it is intended to be seen as Japan in WWII.   I think the setting is not precisely particularized so it can be viewed as a story of war anywhere and of  the throw away victims of war.   This includes children and in too many cases the morals of  the survivors are also essentially a casualty also.

The novel centers around a group of teen age boys from a reform school sent to work in a near by village and is narrated by one of the boys.   No cares at all for these boys.   The residents of the village they are sent to think they are plague carriers.   The boys have only the most primitive of values.   Their world exists as a counterpart to the adult world which moves history and time.  The live surrounded by  dark forest.   The boys fear the forest and will not try to escape detention because of it.   If we want,  we can see the forest as the imprisoning effects of enculturation or perhaps as the total reverse of this,  or for that matter both of these views can be sustained at the same time. We could see the captivity of the boys as civilization and the  forest as freedom.   There is a lot in this book.   I endorse it without reservation.   Based on my limited knowledge of Oe's works I would recommend first reading the marvelous short novels collected in Teach Us To Outgrow Our Madness .   The stories in this collection do not feel somehow like works created by a modern writer but deep stories of wisdom from a civilization and time we will never understand but have somehow been fortunate enough to come upon.   Maybe we can figure them out in part and we will be wiser for the effort.   On the back of the book Nip the Buds, Shoot the Kids is compared to Lord of the Flies.   I think this comparison downgrades Oe's work but I understand the publishers, Grove Press, needed to link this book to a work that lots of people could related to.

Bookphilia.com has an extremely good post on Nip the Buds, Shoot the Kids" that goes into some of the literary background of Oe and relates this book to Oe's vision of the conduct of Japan's Military leadership toward the common people of Japan.   Just like Animal Farm and Gulliver's Travels can be read with no knowledge of the particular forms of their day that they mocked while accepting the knowledge that knowing who Trotsky is may help us relate to the events in Animal Farm in more depth  likewise it is useful to place Oe's work in its historical context.   Oe gives us a lot of freedom in our reading of his works.   You can go very deep in your reading of this book, peeling off layers of art and civilization as you go in. 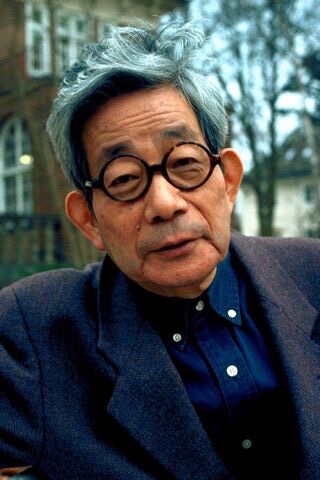 Reading Nip the Buds, Shoot the Kids sounds like a rich and layered experience. Thanks for presenting this novel in your fine review.

I'm not sure how many Oe works there are but you're surely well on your way to reading all of them. I expect to read at least one work by Oe in 2010. That's a personal reading challenge!

The only Japanese author I've ever read (besides manga) is Murakami and I feel like everyone reads Murakami. I've been looking for something different and this sounds like a great choice.