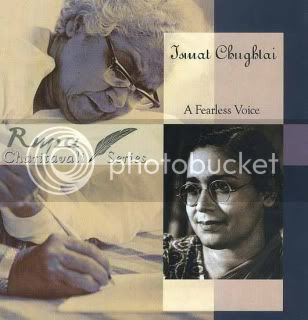 "The Quilt" (aka "Lihaf" 10 pages, 1944, translated from Urdu by M. Asaduddin) by Ismat Chughtai عصمت چغتائی

Ismat Chughtai (1915 to 1991-Pardesh, India) was born into a very traditional and conservative Muslim family.   Chughta earned two
degrees in spite of her own families opposition to education for women.


Most of the female, and nearly all of the male authors of the time of the writing of "The Quilt"-1944-advocated only the very slowest changes to the social order as it regarded the rights of women.  Chughtai was seen at the time as a radical advocate of women's rights.  For example, she opposed the requirement of the veil for Muslim women and advocated equal educational rights for women.   Her writings have been banned as too radical in some countries.


"The Quilt" is an amazing and shocking story for the time and place it was written.   It is about a lesbian relationship set in a time when this could result in stoning to death.  It is told in the first person by a young woman who was given in married by arrangement while she was at most fifteen or so (normal practice at the time)  to a  much older wealthy man.    Her family expects her to get pregnant soon and fatten up while living a life of forced leisure in the female section of the house.  The young woman soon finds out her husband prefers the company of beautiful young men.


The shocking conclusion in the story is slowly and artfully built up to.   I do not want to give away any more of the plot of the story.  (There is a link to read it online at the end of the post.)


Chughtai and her husband were friends with the most highly regarded Urdu short story writer Mulk Anand  (I have already posted on two of his stories.)


You can read "The Quilt" online HERE


Urdu short stories are a completely new chapter in my reading life.   I am very open to guidance suggestions or corrections.


I will soon post on the greatest 20th century Punjabi woman writer (many would say best period) Amrita Pritam.   I will read and post on three of her best known short stories soon, I hope.

Great review Mel! I amtemtedto read the story as I haven't had the privilege to read anything from Arabic writer.
Thanks for the link. I will copy it and try to print it.

My first intro to Urdu short stories. I will read this interesting piece!