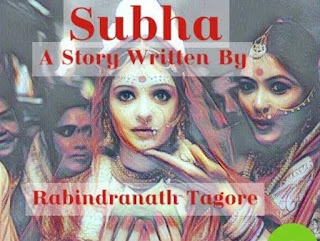 In July of last year I read and posted on Rabindranth Tagore's short story, "Hungry Stones".   This morning I read another wonderful and very moving story of total isolation and loneliness by Tagore, "Subha".

Tagore (1861 to 1941) was born in Kolkata, Indian into a family whose wealth and life style can now only be seen in movies.    His father owned an estate so huge that at one point in his life Tagore traveled through it on a luxurious barge and was met on the river bank by tenants paying token rents to him.   Tagore was raised mostly by servants as his mother died young and his father was very busy administrating the vast estates he owned.   Tagore was educated in classical Indian literature and at age eight began to write poetry and ended up reshaping the Bengali Language.   Later in his life he founded a school and devoted himself entirely to his writing and teachings.   His moral authority became so great that he was able to write the national anthems of both India and Bangladesh, give Gandhi the title of Mahatma (teacher),  and  had a status as a moral leader on a par with  Gandi.   He traveled to the west and met William Butler Yeats, Ezra Pound and other notable literary figures.   This was in a period when western writers were fascinated by Indian thinkers and Yeats wrote the preface for one of his first translations in English.   He wrote largely in Bengali.   His body of work is a great literary treasure.

"Subha" is near heartbreaking tale of the isolation of a deaf and mute girl.   Subha is born into a financially comfortable family.   She is the youngest of three daughters.    Her mother feels a sense of shame she never overcomes when the family realizes that Subha will never be able to speak or hear.   In the culture of the time congenital impairments of children were seen as sign of a moral defect or depravity in the mother.    Her mother tries to love her but she can barely force the emotion.   Her father loves and accepts her.   In due time her older two sisters are married to proper men and given a proper dowry.   Fiinding a husband for Subha is not so simple.   Future mother in laws fear she will give birth to children with the same impairments she has.   Subha has learned to cope as best she can within the context of her family by communicating with gestures understood only within the family.   Her only friends are the two family cows.

One day Subha meets a fisherman. It happens that the man is somehow viewed as simple.   His only interest in life is casting his fishing net.   His family has long ago accepted that he will never amount to anything.  The man appreciates her silence as talking might frighten the fish.    She comes to enjoy seeing him cast his net.   She begins to feel romantic about him.   I will quote a bit from the story to convey  a feel for the prose.


With her large eyes wide open, she scanned their faces as though she wished to learn something. But. One afternoon in the midst of all this, as Pratap was fishing, he laughed: 'So then, Su, they have caught your bridegroom, and you are going to be married! Mind you don't forget me altogether!' Then he turned his mind again to his fishing. As a stricken doe looks in the hunter's face, asking in silent agony: 'What have ned I done to harm you?' so Subha looked at Pratap. That day she sat no longer beneath her tree. Banikantha, having finished his nap, was smoking in his bedroom when Subha dropped at his feet and burst out weeping as she gazed towards him. Banikantha tried to comfort her and his own cheek grew wet with tears.
It was settled that on the morrow they should go to Calcutta. Subha went to the cowshed to bid farewell to the comrades of her childhood. She fed them from her hand; she clasped their necks; she looked into their faces, and tears fell fast from the eyes which spoke for her. That night was the tenth of the new moon. Subha left her room, and flung herself down on her grassy couch beside the river she loved so much. It was as if she threw her arms about the Earth, her strong, silent mother, and tried to say: 'Do not let me leave you, mother. Put your arms about me, as I have put mine about you, and hold me fast.'


I found the scene in which she parts with her only friends, the two cows, very moving and very sad.   Something terrible will soon happen to Subha but I do not wish to spoil the ending.   There is a lot to be learned in this story about Indian culture and family life in the 1910s.   I recommend this story without reservation.

"Shubha" can be read Here

If you have a favorite Tagore short story please leave  comment.

Some Tagore stories I liked were "Holiday," "Exercise-Book," and "The Gift of Sight" all of which I read for class in a Penguin collection of Tagore's short stories from the 1890s.

I didn't read this story but it sounds really good even if something terrible ends up happening to Subha.

Have you read the Nobel Prize winning work of Gurudev Tagore, the Gitanjali?