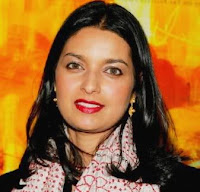 
In April of last year I read and posted on Jhumpa Lahiri's short story "Heaven and Hell".   I am glad to have now read a second of her stories.   Lahari  was born in 1967 in London, the daughter of Bengali Indian immigrants.   When she was three the family moved to the USA.   Lahiri has a Ph.D. in renaissance studies from Boston University.   She won the Pulitzer Price in 2000 for her first collection of short stories  Interpreter of Maladies. Her second collection Unaccustomed Earth won the Frank O'Connor International Price for best collection of short stories in 2008.    Most of her stories deal with Bengali immigrants to the USA.   She has also written a novel, The Namesake.


"Sexy" is told in the first person by an American woman,  rather than Lahiri's normal Bengali narrator.    She is friends at work with a lady from India and she is basically her only source of knowledge about India. On day she meets a to her an exotic looking man.   She does not at first realize he is from India.   Knowing he is married she starts an affair with him.   His wife is living in India.    She slowly begins to realize that the man wants her only for sex.   One has to assume the man somehow feels less guilt in having an affair with an American woman than with an Indian woman.   She begins to feel guilty when her Indian friend at work tells her that her husband is leaving her for another woman.   In just a few pages Lahiri brings the characters to life and creates a world for them to abide in.

The story is beautifully written and deeply insightful.    At the end the woman achieves a kind of insight and feels a sense of shame about her affair.    It is a lesson she learns from baby sitting for the eight year old son of a cousin of her work friend.    I will soon, I hope, read and post on another of her New Yorker stories and I do plan to read all of her work.

I think Lahiri may well be one day considered one of the truly great short story writers.

It is generous of The New Yorker to allow the story to be read for free HERE.

If you have read some of her work, please leave a comment with your experience.

I have read almost everything written by her but this is new to me. Thank you for the link. I loved her writing because it is so down to earth, so realistic and very current as well.

I think Lahiri is among the finest short story writers of her generation. I don't know this particular story, but I've read everything she's published in book form. I think she's the rare writer who excels at the short story form above the novel.

Lahiri has been one of my favorite short story writers for awhile now. I love how she writes her characters. The emotion in her stories always seems so raw and personal. Thank you for the link to the story!

This story and A Temporary Matter were my favorites from Interpreter of Maladies.

Mel, I have a collection of her short stories called Interpreter of Maladies, which includes Sexy (which I read a while ago).

I have read both her short story collections, and loved them too. In fact she's my favorite.

Sexy is a beautifully written story by her, but for me somehow, nothing mathces the style she followed in the Treatment of Bibi Haldar.