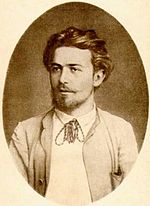 There are only three more or less undisputed literary best of titles.   Shakespeare is the best playwright, Tolstoy's War and Peace is the best novel and Anton Chekhov (1860 to 1904, Russia)  takes the title of world's greatest short story writer.    I have now decided to start another Reading Life Project, the short stories of Anton Chekhov.  I will read through them in chronological order.  I read yesterday "Rapture",  Chekhov's very first short story.

As the story begins a wild and scruffy looking young man runs wildly into his parents apartment.   His parents are alarmed by how excited he is and ask him what is wrong.   He begins to wave a newspaper around says that now everyone in Russian will know his name.  He is so excited he cannot contain himself and runs all over the apartment telling his siblings how famous he was going to be.   Of course like any parent would, his are now going crazy wanting to know what he has done.  He tells his father he thought only celebrities have articles in the paper about them.  The poor father looks toward an icon and crosses himself he is so stressed now!    The young man, who still has not told them what happened, tells his mother to save the paper so they can always recall this day.

His father begins reading the article aloud and it starts out saying the son was observed leaving a public house in a drunken state.   He falls down and causes a bad accident in which he gets a blow to the head (which may explain why he is acting so crazy) from tripping and falling in front of a horse cab.   The horse dragged a sledge over him.   This is his big moment!   The story ends with him running out to let the neighbors know of his great fame.   I really enjoyed reading this story and it was exciting to see the start of the writing career of the world's greatest short story writer.


I also want to take this opportunity to be sure that my readers are aware of a wonderful electronic edition of the Complete Works of Anton Chekhov recently released by Delphi Classics.   It contains all the short stories and novellas, his one novel, The Shooting Party, all of his plays, his complete letters and his notebooks.   The short stories are indexed both in chronological order and alphabetical. There is an active table of contents.   For those who like the idea of reading everything by an author, the Delphi editions are perfect.   I think researchers and students would find the ability to search all of an author's works for key terms very useful.  The volume contains some very well done information on Chekhov and some interesting photographs.   The translations are a mix of Constant Garnett (Chekhov is often considered her best work) and others, including  some brand new ones.  I think a mix of translators is a very good idea.

You can learn more about Delphi Classics Edition on their webpage.   For $2.99 you can have a complete edition of the works of Anton Chekhov

Mel, every once in a while I turn to Chekov and his short stories, which, in spite of their portrayal of everyday life in Russia, never fail to delight me. There's a lot of the Indian common man in his stories which are mainly about hope.

Sounds like a fantastic way to own the works of a great writer such as Chekhov, especially being able to reference the information you want via key terms.

Hey Mel: Chekhov is one of my fave writers! So excited that you are embarking on this project.

I have two volumes of Garnett translations of his short stories (and a number of other volumes of short novels, letters, plays) - thanks for the info on Delphi - good to know they have Garnett's translations - I think I'll have to spring for their volume just to get my collection complete.

Hi Mel, Like Kathy above, I have two Garnett volumes but it's great to have everything together in the Delphi book and so easy to refer to.