Neil Jordan, "Last Rights" and The Dream of a Beast

The Irish Quarter Year Two
A Celebration of the Irish Short Story
March 11 to ? 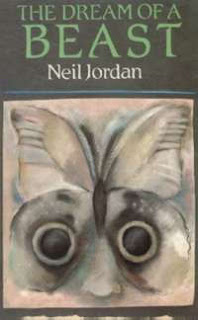 Neil Jordan (1950, Silgo) is an Irish novelist, short story writer and motion picture script writer and director.   He won an Academy Award award for best screen play for the 1992 Hollywood movie, The Crying Game, dealing with members of the Irish Republican Army.  He also directed We're No Angels, Interview with the Vampire and High Spirits.

The Dream of a Beast (I read this in the anthology The Anchor Book of New Irish Writing) is a super entertaining and wonderfully written novella or if you prefer long short story.  Not surprisingly it is also a very strange work.   It is kind of a combination of science fiction, magic realism and nightmare tale.     The central character is a married with children man who is a partner at a small advertising agency.   His new client is a woman who wants him to advertise a perfume with a heavy musk smell.   Either the world begins to change or he begins to lose his mind, or maybe a bit of both.   It begins to rain almost nonstop.   Vegetative growth begins to overtake the city.   The man begins an illicit romance with his client, meeting at the zoo, wild animals begin to escape and people seem to start to devolve.  His behavior becomes increasingly erratic to the point where his family has to have him restrained and his appearance becomes more and more animistic.   This is really a fascinating work in the way Jordan transforms the city.  My first impulse, perhaps brought to my mind by the films of the author, is to refer to this story as highly cinematic (and I am sure Jordan would make it into a great movie).   It is in the tradition of Borges, Kafka, Oe and  Marquez.  Above all it was tremendous fun to read.


"Last Rights" (this is the lead story in Jordan's collection of short stories Night in Tunisia-you can read it by downloading the sample of the book from Amazon) is a very exciting story of a death that makes little sense on the surface, of a man who cuts his own throat with a straight razor in a bath house.   The man, a construction work, killed him self is the wash-house of the Kensal Rise Toutine and Workingman's Association.   Bath Houses are often seen as places for no-name sexual encounters between men and the man does have a strange feeling of anticipation as he prepares to go, a feeling that is not quite pleasure but he does not know  how to describe it to himself.   Every week he gets a bath and it is the high point of his week. (He certainly lives in a rooming house without bathing facilities.)    He approaches the event in a ritualistic fashion.   The descriptions given of the bath house are really brilliant.  We do not really learn why he killed himself, we can only wonder what entered his consciousness in the bathing process that caused him to cut his own throat (a very self violent way to go!)

Born in 1950 in Sligo, Ireland, Neil Jordan's early career began as a writer. After setting up The Irish Writers' Cooperative in 1974, he went on to win The Guardian Fiction Prize for his book of short stories NIGHT IN TUNISIA (1976). Since then he has gone on to publish three novels, THE PAST (1979), THE DREAM OF A BEAST (1983) and most recently SUNRISE WITH SEA MONSTER (1994). Jordan's published fiction has been translated into several languages, including French, Spanish, Italian, German, Dutch, Swedish and Japanese.

In 1982 Neil Jordan wrote and directed his first feature film, ANGEL, for which he won The London Evening Standard's Most Promising Newcomer Award. THE COMPANY OF WOLVES (1984) was his next film and was honoured with Best Film and Best Director Awards by the London Critics Circle and a Golden Scroll for Outstanding Achievement from The Academy of Science Fiction and Horror Films.

MONA LISA followed in 1986, it starred Michael Caine, Cathy Tyson and Bob Hoskins, who won the Best Actor Award at The Cannes Film Festival, the Golden Globe Award for Best Actor and received an Academy Award nomination for Best Actor. The film itself was nominated for a Golden Globe Award, a Los Angeles Film Critics Award and a Best Screenplay nomination from The Writers Guild of America. It was also nominated in the categories of Best Film, Best Direction and Best Original Screenplay in the 1986 BAFTAS.

MONA LISA was followed by two comedies. One, HIGH SPIRITS (1988), set in Ireland starring Daryl Hannah, Steve Guttenberg and Peter O'Toole, the other, WE'RE NO ANGELS (1989), his first all-American production, starring Robert De Niro and Sean Penn. He then returned to Ireland to make a much smaller film THE MIRACLE in 1991, which starred Beverly D'Angelo.
In 1992 Jordan wrote and directed THE CRYING GAME which was nominated for six Academy Awards, including Best Picture, Best Director, Best Actor (Stephen Rea), Best Supporting Actor (Jaye Davidson) and which won Jordan an Oscar for Best Original Screenplay.
In addition, it was voted Best Foreign Film by the Los Angeles Film Critics Association and Best Screenplay by the New York Film Critics Circle and the Writers Guild of America. It also received the Best Foreign Film Independent Spirit Award and was nominated for a Golden Globe Award for Best Drama and the Mystery of America's Edgar Allan Poe Award for Best Film. In the UK, the film won the BAFTA for Best British Film and was nominated for five other BAFTA Awards including Best Screenplay, Best Actor, Best Supporting Actor, Best Supporting Actress and Best Editing. Jordan was selected Best Director by the Guild of Regional Film Writers and nominated for Best Screenplay by the Writers Guild of Great Britain. It also received Norway's award for Best Foreign Film.

In 1994 Jordan returned to the United States to film an adaptation of Anne Rice's popular novel INTERVIEW WITH THE VAMPIRE, starring Tom Cruise, Brad Pitt, Antonio Banderas and Christian Slater. Next came the film of the Irish revolutionary MICHAEL COLLINS (1996), starring Liam Neeson, Aidan Quinn and Julia Roberts, which won a Golden Lion for best film at the Venice Film Festival. In 1996 Jordan was also awarded the distinction of les Arts et Lettres, as officer in the order, on the occasion of l'Imaginaire Irlandais in France, for his contribution to cinema.

He went on to collaborate with Irish novelist Pat McCabe to adapt his novel THE BUTCHER BOY for the screen in 1997, it won Jordan a Silver Bear award for Best Director at the Berlin Film Festival and newcomer Eamonn Owens received a special mention for his performance in the film.

In 1999 Jordan made the psychological thriller IN DREAMS, starring Annette Bening, Robert Downey Jr, Aidan Quinn and Stephen Rea. In the same year he went on to direct his own adaptation of Graham Greene's novel THE END OF THE AFFAIR, starring Ralph Fiennes, Julianne Moore and Stephen Rea. The film was nominated for four Golden Globe Awards, two Academy Awards and ten BAFTA Awards, Jordan was honoured with the BAFTA for the Best Adapted Screenplay.

Jordan soon went on to direct a fourteen minute film based on Samuel Beckett's play, NOT I, which starred Julianne Moore and had its world premiere at the Cannes Film Festival in 2000.
In February 2001 Neil Jordan was the recipient of The Ireland Fund of France Wild Geese Award. In December of the same year he was conferred with the degree of Doctor of Literature (honoris causa) from the The Queen's University Belfast.
Neil's next film which he shot entirely in the South of France, THE GOOD THIEF, starring Nick Nolte, Tcheky Karyo, Emir Kusturica and Nutsa Kukhianidze will have its premiere at the Toronto Film Festival in 2002.
Jordan set up the production company Company of Wolves with Stephen Woolley through which they have produced, THE ACTORS, directed by Conor McPherson, starring Michael Caine and Dylan Moran, and  INTERMISSION, directed by John Crowley, starring Colin Farrell and Colm Meaney.