"The Father" by Guy de Maupassant 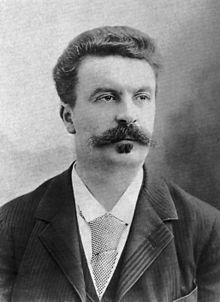 As one of my long term reading projects I am working my way through the complete, as translated into English, short stories of Guy de Maupassant (1850 to 1893-France).   I am using as my text the Guntenburg edition, in nine volumes, of his complete stories.  (I do not doubt that there maybe stories missing from the collections but there are enough for me and the famous ones are in the collection.)  The consensus is that Maupassant wrote ten or so short stories that are of world literary heritage class, lots (near 400 in all I think) lots that are decent stories and lots that seem written really rapidly which some think are sentimental to the point of mawkishness and were just churned out to sell to support his expensive life style.   Anyway the great stories are wonderful and the rest are quite good and they are for sure important texts for anyone into the short story.

I guess "The Father" does seems very sentimental and is written to pull on our emotions in a style that  lacks any real subtly.    It is still a good story and I am very glad I read it and will push on through his collection.   "The Father" is about a very ordinary man living in Paris.   He took the omnibus into Paris to his cleric job and every day a lovely girl would sit near him.   She was a "little brunette with a complexion like ivory".   He liked her face the first time he saw her.   He longed to hold her in his arms without knowing why he felt that way.  She begins to notice he is staring and her and she blushes over his attention.  They gradually strike up an acquaintanceship which passes into a friendship and becomes a sort of romance when he asks her to dinner.   She accepts on the condition he will totally respect her and make no untoward advances.   He of course agrees.   They begin to keep company but  when she will not allow any advances he ends the relationship.   One day he hears a knock on door and it is her.   A few months go by and the romance has been consummated and  he wants to figure out how to get her out of his life.  She lives with her mother and the shame is terrible when she has to tell her she is pregnant and abandoned.   Ten years go by and the man continues to barely make a living, live in his shabby apartment and never finds another love.   Then he sees the woman out  in the park.  But now she is no simple shop girl, she is dressed as a fine lady.   She has a ten year old boy with her and a girl of five.   The man begins to stalk her and he soon knows the boy is his son.   He finds where she lives, speaks with her and discovers she has married a gentleman who accepts her son and knows her full past.   The man is consumed with a desire to meet his son.   He send the woman's husband a letter fully accepting him to want revenge on him.   He receives a letter back inviting him to their house.   When he gets there the man is formally polite and shows him no overt bad will.   The ending is very emotional.   Francois meets his son for the first time and cries out good bye and runs from the house as if her were a thief.

I concede this is a very melodramatic story that plays on our feelings in a pretty obvious way.   Still it is worth reading and it shows the good and bad side of a father, one by biology and one by love.


This post is also part of my participation in Paris in July 2012 hosted by Book Bath and Thyme for Tea.

I didn't realize de Maupassant was so prolific! The stories I've read have all been quite enjoyable, but are probably his more well-known works. Hope to read a couple more for Paris in July.

One of my favourites is 'Madame Tellier's Establishment'. There are some memorable scenes of prostitutes parading through a town then crying for their lost innocence in a church, but it's not sentimental.