Note added July 4, 2014- I have read the three additional short listed stories and I did not find them worthy potential prize winners or stories I cared to post upon. 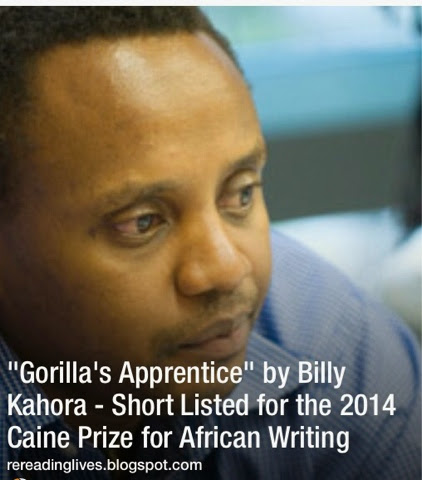 You can read The 2014 Caine Prize Shortlisted works and learn more about the Caine Prize on their webpage
http://www.caineprize.com/
The Caine Prize for African Fiction is given annually to a short story writer born in Africa.  It is a very prestigious award.  I first blogged on the short listed stories (the winner will be named July 14) in 2010. At that time as far as I know I was the only person to blog on each story.  In 2011 the publisher for the Caine Prize asked me to post on the stories again, more bloggers looked at the stories and by 2012 there was a well organized group effort.  There was a lot of political commentary on the stories.  In 2013 I skipped the stories as involved otherwise.  Of the fifteen Caine Stories upon which I have posted, two I considered works of great distinction. "Stick Fighting" by Olufema Terry from Sierra Leon, winner of the £10,000 award in 2010, was a magnicent story of the grandson's of warriors playing stick ball in a garbage dump.  "Bobmay's Republic" by Rotimi Babatunde from Nigeria was a powerful very interesting story centering on a Nigerian man who served in the British Army in Asia during World War II.  It is just a wonderful, hilarious must read work. It was the 2012 Winner.
This year I am going to try to read and post on all the stories.
I previously posted on "Chicken" by Efemia Chela, a delightful story.
I first became acquainted with the work of Billy Kahora (Kenya) when I read and posted on his 2012 story "Urban Planning", set in Nairobi, short listed for The Caine Prize that year.  That story and "Gorilla's Apprentice" depict the urban chaos of Niarobi, focusing on people trying to survive the chaos of an out of control wrought with civil violence tropical mega-city while keeping as much of their humanity as they can.  The story is also very much about the terrible environmental degradation of the country, the consequences of colonialism and is a vivid portrait of a what would be to most readers a nightmarish near narcopolis that the central character of this story calls home.  Like many an Irish short story, it deals with a missing father and a heavy drinking culture.
As the story opens a young man, Jimmy, on whom the story centers is visiting his good friend Sebastian.  Sebastian is a fifty six year old male Gorilla, living in an animal orphanage at the Niarobi Zoo.  Sebastian is very old for a gorilla, way past his prime.  Jimmy, seventeen, lives with his mother in a high rise tentament. His father who Jimmy barely remembers, left long ago.  His mother, still beautiful, has a number of boyfriends.  She seems to try to be a good mother.  As Jimmy goes about the city he sees and is pretty much immune to scenes of urban violence.  Gun shots and fires are common place. The building he lives in has a lot of prostitutes.
The gorilla can kind of be seen as a symbol for the lost wildness of Niarobi. Jimmy goes almost every day to see Sebastian.  One day he observes a man seemingly talking to Sebastian.  It turns out the man is an expert on gorillas and lectures at a university.  Jimmy, compressing a bit, meets the man and he tells him Sebastian will die soon.  The ending was really interesting and amplifies the symbolic import of Sebastian.
This is a good story and I am glad I read it.  I could see it winning.
Billy Kahora

Billy Kahora is the Managing Editor of Kwani. He also writes fiction and completed an MS.c in Creative Writing with distinction at the University of Edinburgh as a Chevening Scholar in 2007. Before that, Billy studied and worked in South Africa for 8 years and in between worked as an Editorial Assistant for All Africa.com in Washington D.C. He has a Bachelor of Journalism degree and post-graduate diploma in Media Studies from Rhodes University. His short story, ‘Treadmill Love’, was highly commended by the 2007 Caine Prize judges. He edited ‘Kenya Burning’, a visual narrative of the Kenya post-elections crisis published by the GoDown Arts Centre and Kwani Trust in March 2009. His extended feature, ‘The True Story of David Munyakei’ on Kenya’s biggest whistleblower has been developed into a non-fiction novella and was released by Kwani Trust in July 2009. Billy was a Regional judge for the 2009 Commonwealth Writers’ Prize as well as the 2014 Etisalat Prize for Literature.