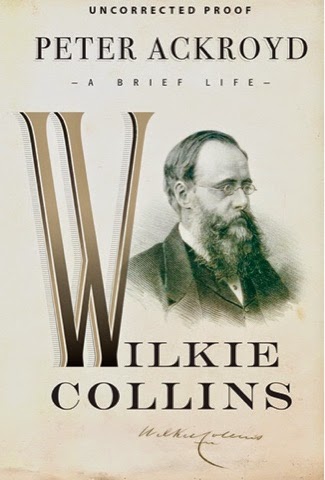 Wilkie Collins A Short Life by Peter Ackroyd could be described as just what you need in a biography when you want more than just the bare facts of Wikepedia but are not up for a massive work.  I have not read a lot of the very large output of Collins (1824 to 1879, England), having read just his most famous novel The Woman in White and one of his numerous short stories.

Ackroyd, in his very pleasant style, starts at the beginning, with the parents of Collins.  He was born into an affluent though not fabulously wealthy family.  Collins was very close to his family.  We see how he begins his writing career.  Of course his parents were worried about the viability of this.

It was fascinating to see the nature of his very long enduring friendship with Charles Dickens.  They worked together on literary journals, I was I admit surprised to learn journals with the serial editions of now famous novels often sold over 100,000 copies.  Collins was for a good while the second highest earner among English authors of his day, behind Dickens.  Collins loved to enjoy himself, he liked women, for years he kept two mistresses, having children with them.  He never married though he took care of his children and was a decent father.  He liked living well and once his books and plays began to do well he always traveled first class.  He was what one might call a pleasure seeker or to use a word more likely to be employed in the 19th century than the 21st, he was a voluptuary.  He suffered medical problems including long bouts with gout, the rich man's disease of the period.  Some might see in his closeness to his mother and emotional dependence the reason for his not marrying.

Ackroyd does a very good job of weaving the plots of his novels into the life story.  I felt I knew Collins after reading the book.  He came across to me as a decent man without a lot of hang ups.  He liked to thumb his noise at the hypocrisy and prudery of Victorian England in his work and his life style.

I recommend this book for anyone who finds the subject matter of interest.

While I am not surprised that he wrote this book Peter Ackroyd still amazes me. I've read his biography of Dickens, but he has written so much more including both fiction and non-fiction that I marvel at his output.

This sounds interesting, Mel. I enjoyed your review of this biography.