"Drive My Car" by Haruki Murakami (2015, translated by Ted Goossen, in Arrival, edited by John Freeman) 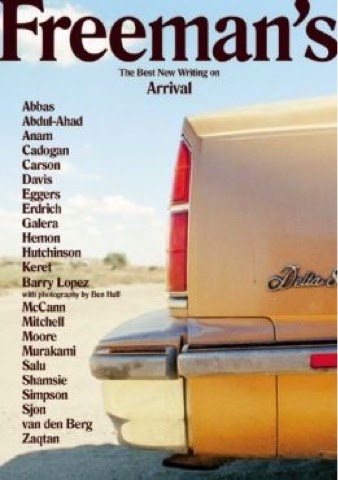 A new anthology of short stories focusing on travel experiences of diverse sorts, Arrival edited by John Freeman contains a number of promising looking essays and short stories.  Upon looking the collection over, I was very happy to see a new, or at least new in English translation, short story by Haruki Murakami.
"Drive My Car" centers on an actor, a widower in his fifties.  He is mostly a stage actor but has had success as a character actor in the movies and done some TV.  He was married to a beautiful very well regarded actress for twenty years.  She died of overian cancer at forty nine.  He tells the mechanic working in his Saab that he needs a driver.  He likes to rehearse his lines in the car on the way to the theater.  The mechanic recommends a twenty five year old woman for the job of driver.  We learn the tradgedy of the actor's life was the four affairs of his wife.  Their relationship to him always seemed very good and he does not understand her motivation.  The wife never realized he was aware of her affairs. In a conversation with the driver we learn he deliberately set out to become friends with one if the actors involved with his wife in an effort to find a way to take revenge.
We learn a bit about the driver and more about the actor as they spend time in the car.  "Drive My Car" is a very interested low key story.  I was kindly given a D R C of Arrival and exoect to read more from it.
I hope to soon post on two recently brought back into print very early novels by Murakami, Pinball and   Wind.
Ambrosia Boussweau