Juana by Honore de Balzac (1834, A Novella, A Component of The Human Comedy) 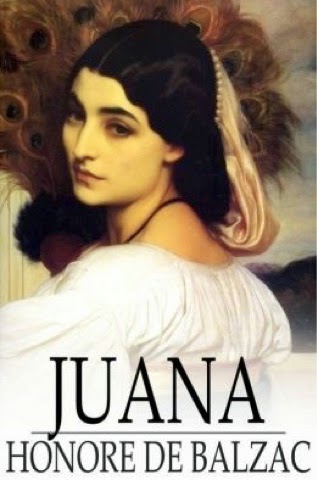 Juana is set during the Peninsular War.  Balzac does for sure type people based on their country, and in France, on their  province.  He, besides the French of course, employs lots of Italian settings and characters and secondly Spanish.  He especially seems to stereotype women based on where they are from.  Maybe to compare, just imagine the treatment of Latin American women in older American movies as somehow more "hot blooded" and more devious than American women.  This does get to be annoying but Balzac is hardly the only writer of this period to do this.
I said before, even those works of Balzac that do not reach his full potential, all have at least a great segment or two.  A town in Spain has just been taken by a French lead regiment with mostly Italian troops.  One of the culture quandries I am picking up on Balzac is what was his attitude toward Napolean?  In this passage, in the translation of Kathleen Prescott, you can see his admiration of the details of Napolean's people management insights:
"In the marechal’s army was a regiment, composed almost entirely of Italians and commanded by a certain Colonel Eugene, a man of remarkable bravery, a second Murat, who, having entered the military service too late, obtained neither a Grand Duchy of Berg nor a Kingdom of Naples, nor balls at the Pizzo. But if he won no crown he had ample opportunity to obtain wounds, and it was not surprising that he met with several. His regiment was composed of the scattered fragments of the Italian legion. This legion was to Italy what the colonial battalions are to France. Its permanent cantonments, established on the island of Elba, served as an honorable place of exile for the troublesome sons of good families and for those great men who have just missed greatness, whom society brands with a hot iron and designates by the term “mauvais sujets”; men who are for the most part misunderstood; whose existence may become either noble through the smile of a woman lifting them out of their rut, or shocking at the close of an orgy under the influence of some damnable reflection."
The plot action turns on a army officer  becoming infatuated with Juana.  She is the youngest daughter of a long line of courtesans, living outside respectable society.  Of course she is conventionally beautiful. The romance is your standard Balzacian  story line.
Juana is interesting, the sections on the regiment are first rate.
Ambrosia Bousweau