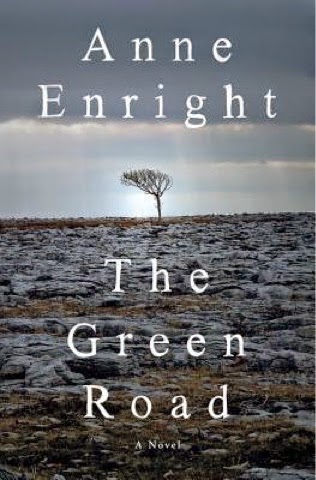 In 2012 I read and greatly enjoyed Anne Enright's novel The Pleasures of Eliza Lynch.  Set in Paraquay in the 1860s it is about  the Irish mistress of the ruler of the country.  I have also read a few of her highly regarded short stories.
The Green Road centers on an Irish family, The Madigans.  The family consists of the mother, the father is deceased, and her adult children, two sons and two daughters.  Major publications such as The Guardian and The Irish Times have done highly laudatory reviews.  It has been referred to as a "very Irish work".  It is hard to disagree.
The real time action is in Ireland in 2005 but much of the novel  is taken up with stories of the past of the children.  A very well realized section, focusing on Dan, the gay son who at one time wanted to be a priest, is set in New York City in the early 1990s.  Dan is engaged to a lovely woman but is heavily into gay sex at the height of the aids epedemic.  This era has been the locale of numerous literary works but Enright does a good job of letting us feel what it was like, with the special emphasis of Dan as a handsome Irish lad.   Another son is an aid worker in Mali.  We see the terrible poverty he tries to alleviate and are shown the various relationships of the workers.  One daughter stayed at home and we see her kind of cramped life.  Alcohol plays a big role in everyone's life.  The beauty and history of Ireland are wonderfully evoked in The Green Road.
In my 500 or so posts on Irish literature I have often, taking a lead from Declan Kiberd, said that one of the dominant themes of Irish literature is that of the weak or missing Irish father.  The Green Road, to me, very much exemplifies this.  The father is now dead but as he lived we see he began to disappear in silence.  The famine years play a big part in the background of the plot.
Ireland is a magic place, one from which there seems little permanent  escape.
The Green Road is a lovely book, with some very marvelous sections, very interesting characters skillfully set in time and place. The plot action is exciting and will keep you interested.  I recommend it to all with no reservations.
Anne Enright was born in Dublin, where she now lives and works. She has published three volumes of stories, one book of nonfiction, and five novels. In 2015, she was named the inaugural Laureate for Irish Fiction. Her novel The Gathering won the Man Booker Prize, and her last novel, The Forgotten Waltz, won the Andrew Carnegie Medal for Excellence in Fiction.
I was kindly given a review copy.
Mel u