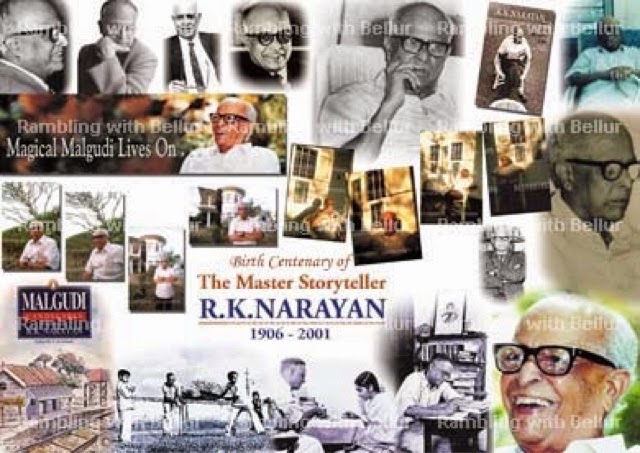 R. K Narayan is one of my favorite writers.  I have read and posted on eleven of his novels and a number of his short stories.  J. K. Lumpari considers him one of the masters of the short story.  Most of his stories are set in the imaginary community of Narayan's creation, Malguidi, India.  Older residents of India may recall the wonderful TV series  based on his stories, Malguidi Days, many can be found on YouTube.
One of Narayan's evident objectives was to portray people in lots of different jobs.  Today we meet Sam.  He makes his living as an attendant for the sick in hospitals.  He stays full time in a patient's room.  His current client has undergone eye surgery and is eagerly awaiting the removal of coverings over his eyes.  Sam is always talking about his time working as a medical aid in numerousGra military campaigns but he cannot quite recall any exact wars or battles he worked.  He rarely stops talking, complaining about the nurses and second guessing the doctors.  Something very unexpected happens, either the patient has a very vivid dream or Sam without authorization took him outside for a drinking party.  We learn Sam is not a perfect saint, he learned to drink while working for the military, and even though married has a long term acquaintanceship with one of Malguidi's "public women", a euphemism for what it sounds like.
This is for sure a fun story.  There is a magical quality to the prose style of Narayan I cannot quite describe.  I read this in an anthology of his short stories, Grandmother's Tale and other Stories.  It is a good collection though I would suggest you buy first the anthology his  of short stories edited by J. K. Lumpari, Malguidi Days.