"A Drama on the Seashore" by Honore de Balzac (1834, A Short Story Component of the Human Comedy) 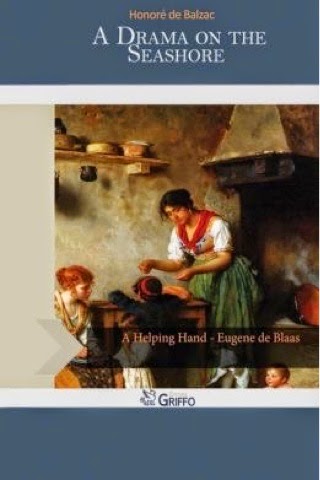 62 of 91
"There are, as it were, two youths, — the youth of belief, the youth of action; these are often commingled in men whom Nature has favored and who,like Caesar, like Newton, like Bonaparte, are the greatest among great men."
"A Drama on the Seashore" is set in the sea coast area of Brittany, a rugged area.  Once you leave Balzac's Paris you enter a different world, literally and symbolically.  The people of Brittany are as rugged as the cliffs that border the sea.  The story is really two stories within a story.  As the story begins we are with a Parisian couple on holiday.  The encounter a fisherman carrying his catch from a day's work.  He works the tidal pools as he has no boat, not even a net.  The couple learn the man, 37, works to take care of his father who is disabled.  He is single as he does not earn enough to support a wife and children, though we feel his loneliness.  The couple offers him ten times the market value for his catch.  At first the man refuses it, not wanting to cheat the couple.  They agree to hire him as a guide to walk them along the seashore.
They pass a man dressed in the worst rags isolated on a small island.  We learn his very tragic very sad story.  I will leave the story of the man unspoiled.
The story shows a lot about the values, in the world of The Comedie Humaune, of the provinces versus Paris.  There is a lot to ponder in this short work about class consciousness.
Ambrosia Bousweau

Thanks, haven't heard of this story.