"Run on the Molars" by Elaine Chiew (from Cooked Up, Food Fiction From Around the World, 2015) 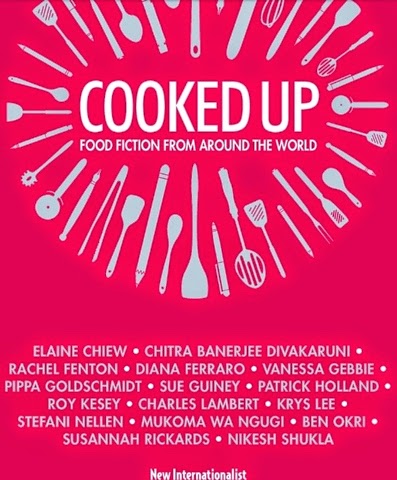 I love short stories and food, not necessarily in that order, so I was elated to be given a D R C of a forthcoming very soon anthology devoted to short stories centering on food. I was delighted to see that  Cooked Up Food Fiction From Around the World edited and introduced by Elaine Chiew contains stories  by Rachel Fenton and Sue Guiney.  I have previously posted on two of Rachel Fenton's wonderful short stories and she kindly did a very interesting Q and A session on my blog.  Sue Guiney helped me do something relatively unique of which I am proud.  She conducts for at risk Cambodia children fiction workshops in which participants express themselves in English through stories and poems drawn from their experiences.  (A mastery of English is essential for professional success). I was given the honor of publishing many of these very moving works.  I have also read and posted on two of Sue Guiney's set in Cambodia novels, both of which I highly recommend. I was also happy to see a short story by Krys Lee included, having enjoyed one of her works a while ago.  The diversely selected other contributors all have very interesting bios.  I hope to also post on the stories by Sue Guiney, Rachel Fenton and Krys Lee and perhaps some of the new to me writers but will today talk about "Run of the Molars" by the editor of the collection, Elaine Chiew. a story I greatly admired.
As "Run of the Molars" opens an elderly woman is flying in from Singapore for a month long visit in London with her three adult daughters.  Singapore is on my list of great dining cities, from the elegant buffets at the top hotels to the incredibly interesting  food Hawker Halls.  As a Singaporean side benefit, cleanliness standards are very high. Singapore food is a mix of Indian, Malay and Chinese.  The daughters feel guilty because they did not want to spend the money to fly home for their father's funeral.  Whenever he lost at cards, he used pick out a daughter and whip her so they did not feel much love for him.
Chiew has done a brilliant job with the character of the mother, her daughters and most of all the family relationships.  The mother has a very sharp tongue and is not shy to express her criticism.  Her first impression of London is that it is a filthy run down place, and compared to Singapore she is right. She has a number of predjudices and quirks.  The family gatherings revolve around food and of course nothing the daughters can fix is good enough.  I loved this scene, it seems so real.  Under it all the mother is just a bit of a monster, pulling the chains of her girls but you know she had to be tough to survive and to raise her daughters as best she could.
"There was steamboat. Her mother gazed at the broth as if to discern the tidal urges of fate, but her mouth narrowed immediately, and she tucked in her chin. The broth was missing key ingredients, like goji berries, licorice root, dong quai or jujubes. These were things on her list of must-haves. Their mother was about to leave and all Tom and Maggie had succeeded in doing was climbing onto her shit-list. True to form, when they sat down to eat, her mother didn’t pick up her chopsticks, didn’t look at the platters of shrimp, fish-balls, tofu cubes, choy sum, or anything else jostling for space on the laden formica table. Instead, she asked for two slices of white bread. ‘You have?’ she asked Maggie. Maggie stood up and flung her chopsticks into the corner. She started cussing in Hokkien. Her eyes bulged like a pomfret. Winnie clapped her hands over her ears. Tom tried to downplay the escalating emotion by shushing Maggie. Matthew stood up as well but sat back down when he realized there was little he could do. Only Leenie and her mother exchanged glances. Her mother’s eyes were curiously glassy, a dull flush pollarded her cheeks, and Leenie could see the thin gleam of her teeth between the cracks, the agitations of her jaw – as if grinding her teeth at a succubus over Leenie’s shoulder."
"Run on the Molars" is long enough to allow us to understand the family dynamics.  There is a scene of  near heartbreaking sadness and beauty near the close of the story that really quite amazed me.  It made me rethink my perceptions of the mother, not on the surface an easy person to like.  It was an image to haunt dreams.  This story is a very much a work of art and it is flat out a lot of fun to read.  Anyone with a mother they dearly love who might not be all sweetness and light all the time will relate and relish this story.
Official bio
Elaine Chiew is a London-based writer, and her short stories have won the Bridport Prize (2008), Camera Obscura’s Bridgethe-Gap competition (2010), been shortlisted for the 2014 MsLexia Prize, and been shortlisted twice for the Fish Short Story Prize (2012). They have also been selected by Dzanc Books’ Best of the Web (2008), Wigleaf’s Top 50 Microfiction (2008), storySouth’s Million Writers Award (Top 10 Winner, 2006), the Per Contra Prize (Top 10 Winner, 2008) and Glimmer Train’s Top 25 Emerging Writers Competition2006), the Per Contra Prize (Top 10 Winner, 2008) and Glimmer Train’s Top 25 Emerging Writers Competition (2005). They’ve also appeared in numerous publications, including One World: A Global Anthology (New Internationalist, 2009) and Short Circuit: Guide to the Art of the Short Story (Salt, 2009). She is the editor and organizer of this anthology. She blogs about food and fiction on redemptioninthekitchen.blogspot.com
Mel u

I'm so glad to see that you've discovered this collection, Mel. It's full of great stories and I'm honoured to be a part of it, to be sure.

Meg, I've just found this now, Rae Fenton told me about your review. A huge thank you from us for reviewing some of the stories, and it's been very gratifying to hear that some of the stories have made an impression on you. Thank you.

Sue Guiney. As usual I enjoyed your work a lot. I look forward to more novels and stories

E. P. Chiew. It was great to see your book featured at the London Festival of Short Stories. It is a very well done high value collection.