Sicily An Island at the Crossroads of History by John Julius Norwich (2015, forthcoming) 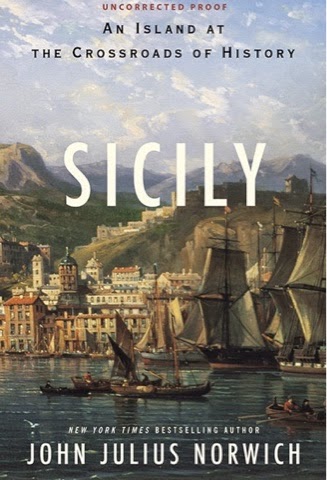 Long ago I read John Julius Norwich's trilogy on the Byzantium Empire.  I was happy to be provided the opportunity to read and post on his latest and what he says will probably be his last book, Sicily An Island at the Crossroads of History.  I would say I was disappointed in this book and in some of the  prejudices of Norwich against what he calls "orientals".  I was shocked to read these lines
"he was an oriental through and through. His life was more like a Sultan’s than a King’s, and his character embodied that same combination of sensuality and fatalism that has stamped so many eastern rulers. He never took a decision if he could avoid it, never tackled a problem if there was the faintest chance that, given long enough, it might solve itself. Once goaded into action, however, he would pursue his objectives with ferocious, even demonic, energy."
There are numerous such  passages, some worse than this, to be found.
This attitude to me tainted the book badly.   He also numerous times suggests "fair haired, light skin rulers" we're loved for their good looks over "darker" rulers.
This is pretty much just a history of who ruled the island.  You will leave it with no sense of how the citizens of the island, even the rulers, lived their lives, what they ate, wore, etc.
For most I would say just read the Wikepedia articles on Sicily and save your $32.00 for something else.
Mel u