My Post on "The Shrine" by Kirstin Zhang - (with a link to the story)
Last week I had the great pleasure of reading Kirstin Zhang's 2015 Harper's Bazaar Prize Winning Short Story "The Shrine".  Set on an isolated Japanese island during the waning days of  WW Two, in just a few pages it evoked in a powerful  fashion the sense of how it must have felt to live on this island as your world collapsed.
"The Enemy Within" is set in Indonesia in 2005, a bad outbreak of dengue fever has killed hundreds.  One of the best ways to protect against dengue, there is no vaccine, is to spray the area around where you live for the disease carrying Mosquitos.  Akbar, the central character, has a job as a sprayer.  He buys his spray and he makes his money by charging those he sprays for more for the chemical than he pays.  The story depicts a pervasive culture of corruption.  Akbar overcharges his customers and then lies to his partner about how much a customer pays.
The structure of the story is quite intricate.  Akbar's wife tells him she was leaving for her brother because she is very mad that their refrigerator broke  down.  There  are several instances of involuntary memories that melt into each other and the themes of the story.  Akbar thinks  of the dog he had as boy, he seems in his late forties when he finds a puppy in a garbage container.   This seems kind of a metaphor for life at the bottom of society in Indonesia.  His work partner tells him they will earn enough in a rich part of town to allow him to buy his wife a refrigerator.  The people in the area they will work tommorow are so rich "that they can afford to run their air conditioning for their Persian cat.  Maybe the maid from the Philippines will give him ice coffee".  In a culture where thousands of women leave to work as maids in the Middle East or Hong Kong, to import a maid from outside Indonesia is not just an obvious wealth marker but a subtle repudiation of your own lower classes as not qualified to clean your cat's litter boxes.
There are other enemies within at work in this story besides the dengue virus.  Akbar has dreams of attacking giant mosquitoes with a machine gun only to find one of the insects with the face of his father.  In 1965 as many as a million people were killed when the government retaliated against communists by slaughtering unarmed people in rural Indonesia.  The communists were enemy the state could not really see but the slaughter against the people went on with the same ferocity as the attack in 2005 on Denque Mosquitos.
Zhang's story compresses a vast amount of social data in just a few pages.  There is much more to the story than may meet the eye on a first reading.  Small incidents are mirrors of huge issues.  The characters are very well realized.  The conversations are perfect.  Married men will relate well to Akbar's wife's ultimatum on the refrigerator.  I felt I was there as I read the story.  It is a lot of fun to read as well as being a serious work of art.
As far as I know only this and "The Shrine" can be read online.  I have access to three of Zhang's print literary journal stories and will read and post on them quite soon.
I loved this story.  I live in a tropical mega-city where Denque is an issue and there are great gaps between the poor and the rich, a place where petty corruption is the accepted norm, and I totally believed in Zhang's story.
Zhang has kindly agreed to do a Q and A session so look for that soon, once I have posted on all the stories to which I have access.
You can read "The Enemy Within" here (this link also has bio data on Zhang) 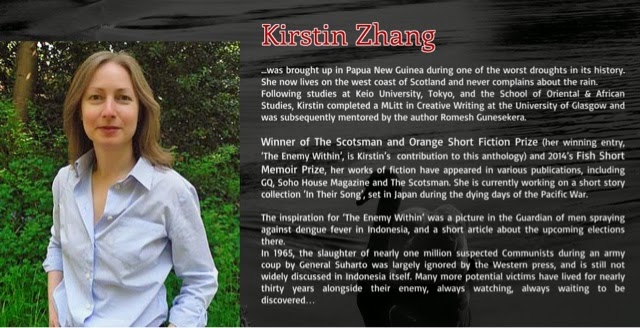