The Convenience Story Woman has sold over a million copies in Japan.  It has a cult like following of devoted readers, myself now included, trying to unravel the meaning of the central character Keiko Furukura.  Keiko starting working at a Tokyo convenience store at 18, we meet her at age 36 still working in the same convenience store. A job in a convenience store is not considered one for college students needing extra money, job hoppers, and people needing temporary work.  It is not a socially acceptable permanent position in contemporary Japanese society.

Kieko was a strange child.  Once other kids in her elementary school were fighting.  The teacher yelled stop but they would not so Keiko hit one on the head with a shovel.  When asked why she did that she said she was stopping the fight.  Of course her parents were distressed.

Keiko totally submerges are identity into being a “convenience store woman”, living only to fulfill that position.  Years went by, coworkers and managers came and went but Kieko stayed.  Nothing ever changes in her life, no boy friends, and her only close relationship is with her sister.  People ask her why she sticks in a low income dead end part time job, her sister tells her to say she has a health issue when people ask. We see the employees come and go, get a look at the work flow in the store.  People do wonder why she has never married, expected of Japanese women.

Then a strange man begins to work at the store.  In a remarkable series of events he quits his job and moves in with Kieko, who supports him.  Her family and friends are happy she seems to have a relationship, maybe it will lead to marriage.  But no, it is a weird sexless relationship. The man repeatedly tells her she is so drab an unattractive he could not climax with her as needed to produce a child.  The man is verbally abusing and is clearly taking advantage of her.  Then Kieko after 18 years quits her job.  Even the store manager who relies on her loyalty congratulated her, thinking she was finally moving toward a normal life.

I will let you discover what happens next.

This novel was tremendous fun to read.  Some compare Kieko to characters out of Kafka and Gogol.  To me she belongs with the “little people” in the fiction of Robert Walser.

She has written nine other novels. One was recently translated and it seems the others are in process.  I will read as many as I can. 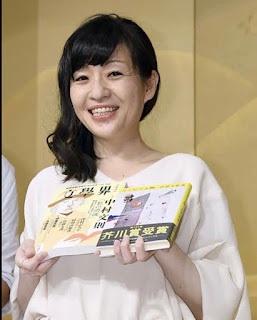 Sayaka Murata (in Japanese, 村田 沙耶香) is one of the most exciting up-and-coming writers in Japan today. She herself still works part time in a convenience store, which gave her the inspiration to write Convenience Store Woman (Conbini Ningen). She debuted in 2003 with Junyu (Breastfeeding), which won the Gunzo Prize for new writers. In 2009 she won the Noma Prize for New Writers with Gin iro no uta (Silver Song), and in 2013 the Mishima Yukio Prize for Shiro-oro no machi no, sono hone no taion no (Of Bones, of Body Heat, of Whitening City). Convenience Store Woman won the 2016 Akutagawa Award. Murata has two short stories published in English (both translated by Ginny Tapley Takemori): "Lover on the Breeze" (Ruptured Fiction(s) of the Earthquake, Waseda Bungaku, 2011) and "A Clean Marriage" (Granta 127: Japan, 2014). - from Goodreads

I read this book last year and enjoyed the quirkiness of it. I had forgotten about this author. Thanks for the reminder!

I listened to the audiobook and fell right into the character. On occasion, I laughed out loud, but there was an undercurrent of sorrow too. Looking forward to hearing what you think of the most recently translated novel. It seems to have been reviewed well too.