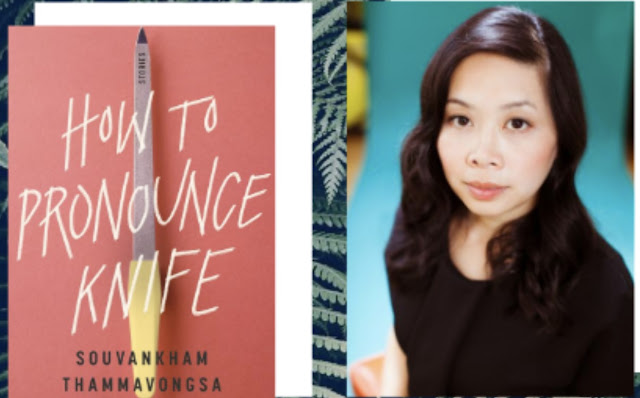 Edge of the World

“ I think now of what my mother knew then. She knew about war, what it felt like to be shot at in the dark, what death looked like up close in your arms, what a bomb could destroy. Those were things I didn’t know about, and it was all right not to know them, living where we did now, in a country where nothing like that happened. There was a lot I did not know.”

Souvankham Thammavongsa’s debut collection, How to Pronounce Knife, centers on stories about Laotian refuges adjusting to starting over in new to them countries.  “The Edge of the World”, narrated by a forty five year old woman who immigrated with her parents, by way of a refugee camp from Lao when she was about five years old.  We do not know her age until the story nearly concludes.

As the story open we are watching American TV with the narrator and her mother.  The mother is 23.  She is learning English from Soap Operas.  She stays at home while her husband works.  She excuses him of having affairs.  He works, we do not know what he does, and does struggle a bit to keep up because of his not yet strong English.

We go along to a party of refugees.  Much of the conversation is about conditions back home, news of those left behind is sought, they wonder who got out.  We see the father has a much more outgoing personality than the mother.  Another person tells the woman not to speak to her daughter in Laotian as she will not fit in at school.

“My parents didn’t spend much time alone, and when they did, there were no Lao bars or cafés or restaurants for them to go to. Occasionally, we were invited to get-togethers at the homes of other Lao refugees. Some had been here a long time, like us, and some had just arrived. These parties were where everyone went to dance and listen to music, play cards and eat, reminisce and talk about old times. They would laugh all night—sad, faint bursts of air—and shake their heads in disbelief at what they had made of themselves in this new country.

My parents went to these parties to hear the news from back home or to ask what had happened to those they had left behind. Who was still there? Was their house still standing? And if they’d made it out of Laos, which refugee camp had they ended up in? How long were they there? Where did they land?”

There just is so much of high insight and interest in this story.  The mother has seen  and lived through great misery.

Souvankham Thammavongsa is the author of four acclaimed poetry books, and the short story collection HOW TO PRONOUNCE KNIFE, winner of the 2020 Scotiabank Giller prize, finalist for the National Book Critics Circle Award and PEN/American Open Book Award, a New York Times Editors' Choice, a TIME 100 Must-Read Books of 2020, out now with McClelland & Stewart (Canada), Little, Brown (U.S.), and Bloomsbury (U.K.). Her stories have won an O. Henry Award and appeared in The New Yorker, Harper's Magazine, The Paris Review, The Atlantic, Granta, and NOON. Thammavongsa is a judge for the 2021 Griffin Poetry Prize. She was born in the Lao refugee camp in Nong Khai, Thailand and was raised and educated in Toronto.”  From the author’s website

I will be reading more of the stories of Souvankham Thammavongsa soon.

I'm glad you've been able to find some of her stories; I felt sure that you would appreciate them. What a light touch she employs here, in this one, to write of such dark and heavy topics, and how gently she explores a daughter's realization of a mother's deeper life experiences.