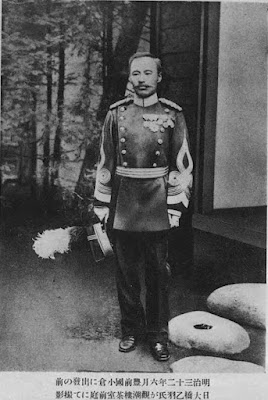 “Under Reconstruction” is included in Twenty-Five Stories by

Ogai Mori (1862 to 1922) was born into a privileged family in the southern Japan.   His family had long had the been by right of inheritance physicians to the daimyo (a feudal samurai lord) of the region.    As the oldest son of the family, Mori as expected graduated from Medical School.   In his younger days he studied Confucian texts to supplement his schooling and insure a grounding in the classics.    After graduation he enrolled in the Japanese Imperial Army.   The army sent him to Germany to pursue advanced medical training and while there he developed a passion for European literature.     Upon return to Japan he was given a high ranking position in the army medical corps.   While pursuing his military career he started at his own expense a literary journal in the pages of which Japanese literary criticism first began.   In time he  was promoted to the position of Surgeon General of the Japanese Imperial Army.   While in the army he served in Manchuria and Taiwan during periods of combat.   As a hobby he pursued his writings, the most famous of which is The Wild Geese.

In 2010 during JL3, i read a fascinating novel by Ogai Mori, Vita

Sexualis, published in 1909.  It is considered an autobiographical novel of the sexual development of Mori.   It was considered so daring at the time that it was banned three weeks after its initial publication and Mori drew an official reprimand from his military superiors.   The book is narrated as if one writer was presenting the manuscript of a second one.

Now after 11 years I was delighted to find the lead story in a very good collection of Japanese Short Stories (listed above) was by Ogai Mori.

One of themes of Japanese literature in opening decades of the 20th century was on the delitorious impact of contact with western Society on society.  Often this was developed through a depiction of the relationship of a Japanese man with a European woman.  The man in this story has set up a luncheon meeting with a German woman he had a relationship with while living in Berlin, at the hotel restuarant.

“Finally he caught sight of a small signboard with the inscription written horizontally in the Western style: “Seiyoken Hotel.” The front of the building facing the canal was covered with scaffolding.” 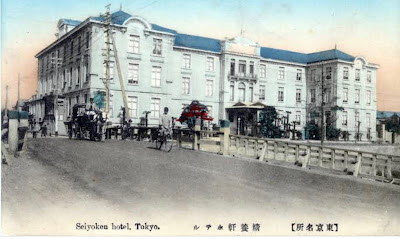 He is surprised to see they have adapted the western custom of keeping their shoes on while dining.  He has made a reservation and is taken to a large room without  customers.  He hears sounds of renovations.

The woman before coming to Tokyo had been working as singer in Vladivostok.

““Oh, that explains it. The place does give one rather an unsettled feeling. Not that I’m a particularly calm sort of person at best.” “When did you arrive in Japan?” “The day before yesterday. And then yesterday I happened to see you on the street.” “And why did you come?” “Well, you see, I’ve been in Vladivostok since the end of last year.” “I suppose you’ve been singing in that hotel there, whatever it’s called.” “Yes.” “You obviously weren’t alone. Were you with a company?”

Japan had just won the Sino-Russian war so there is submerged meaning here.

The elegant dinner is very enjoyable to vicariously experience.  We see the German woman as somewhat adrift, perhaps headed to America.