The Kitchen Boy: A Novel of the Last Tsar by Robert Alexander- 2003 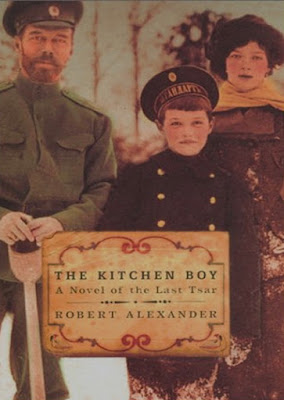 The Kitchen Boy: A Novel of The Last Tsar by Robert Alexander - 2003

The Kitchen Boy is the second work fiction I read this month dealing with the collapse of the Romanov dynasty.  Earlier I read A Gentleman in Moscow by Amor Towles, which I loved.  The late Romanov period has been an interest of mine for a long time.

The Kitchen Boy is structured as if it were a tape recording of a man, now 98 and living in Chicago who at age 14 was in Yekaterinburg (romanized as “Ekaterinburg” serving as a kitchen boy to Tsar Nicholas and his family while they were held captive by the communists.

( The Russian Imperial Romanov family (Emperor Nicholas II, his wife Empress Alexandra and their five children: Olga, Tatiana, Maria, Anastasia, and Alexei) were shot and bayoneted to death by Communist revolutionaries under Yakov Yurovsky in Yekaterinburg on the night of 16–17 July 1918. Also killed that night were retainers who had accompanied them: notably Eugene Botkin, Anna Demidova, Alexei Trupp and Ivan Kharitonov

The bodies were taken to the Koptyaki forest, where they were stripped and mutilated.  Wikipedia.)

The man’s wife recently died, their only child, a son, was killed in an automobile wreck.  He is intent on producing a full account of what he experienced in Yekaterinburg to share with his 35 year old granddaughter.   He has lived for over 85 years under a false name in Chicago, much of it in a grand mansion.

The narrator speaks in great reverence for The Tsar, his wife and four daughters.  The hemophiliac heir Alexi, the same age as the Kitchen Boy, is the central concern of the family.  The family is lead to believe by a series of smuggled in letters that a group of 300 White Russian Officers was on their way to rescue them and pave the way for Nicholas to return as ruler.  They have other loyal retainers, a English doctor, a tutor, and a cook.  Orthodox Russian priests and Sisters also try to help them.  Some of the guards are respectful, some hate the royal family and degrade them.  Nicholas is now addressed as “Citizen Romanov”.  The Kitchen boy conveys notes back and forth concerning the rescue of the Romanovs.  We are given a very graphic wonderfully developed view of the family life, the coming tragedy the weakness of Nicholas as a ruler, the daughters and of course Alexi.  Food was a constant issues.  The Kitchen Boy tells us the Romanovs never complained, but for the Tasrina. She was hated for her German ancestry and the false rumors about her relationship with Rasputin.

His description of the murder of the family is truly horrifying.  After the  killings the guards molested the persons of the women.

There is a mystery in his narrative.  How did he become fabulously rich as part of Chicago’s high society?

In the Epilogue of the novel, focusing on the Granddaughter’s trip to St. Petersburg in 2001 in which she will be donating a billion dollars worth of Romanov treasure to the Russian people as her grandfather wanted.  She was left one hundred million dollars.  Shocking revelations come out at the end about  the true identities of Kitchen Boy and her mother.  I did not at all see the ending coming.  I will say I found the epilogue spell binding.

I greatly enjoyed this book.  It is very different from A Gentleman in Moscow.  Lovers of quality historical fiction about the end of the Romanov dynasty will enjoy both.

“For over forty years Robert Alexander has been traveling to Russia, where he has attended Leningrad State University, worked for the U.S. Government, and traveled extensively. For nearly twenty years he was a partner in a very successful St. Petersburg company that operated a warehouse and customs clearance center, dental clinic, and Barabu, chain of espresso-wine bars with locations at The Hermitage and the Fortress of Peter and Paul.

Alexander was inspired to write his first book when he was followed by the KGB. Since then he has penned some twenty-four books, including mysteries, thrillers, children’s fiction, and historical novels. He has also authored popular mystery games, written for television, and created mysteries that appeared on the back of 15 million boxes of Total Cereal.  His first historical novel of revolutionary Russia, The Kitchen Boy, was a New York Times bestseller, and is being produced for film. Mr. Alexander speaks frequently to book clubs and can often be heard on the radio.  Born and raised in Chicago, Alexander currently makes his home in Minneapolis.” - from the Author’s website

I hope to the other two books in his Romanov trilogy soon.