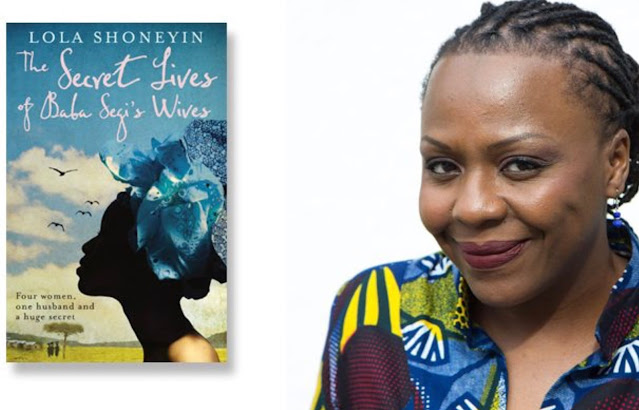 The Secret Lives of Baba Segi’s Wives gives us an inside look at a poylagmy in modern Nigeria.  Baba Segi has four wives, all living in one household.  For a long time there were three wives, each with multiple children.  The oldest manages the household.  The husband shares his affections evenly with the women on a schedule.  He can only be described as a brutal lover.  He prides himself on siring children with each of the wives.  Then one day he decides to marry a much younger woman, unlike the others she is a college graduate.  The other women are outraged.  They conspire to make the Life of the new wife miserable in the hope she will leave.

The chapters rotate in point of view from each of the four women.  We learn about their background prior to marriage and the dyamics of the Family group.  Slowly secrets are revealed.  Two years go by and the new wife does not get pregnant.  Baba Segi is very upset, saying a barren wife is like a rotten piece of fruit.  Of course as all the other wives easily got pregnant, he blames her.  The other women are privately happy over this but offer her advise based on old notions.

An incredible secret eventually comes out about the husband and the children.  One that thretens the entire family.

The characters are well developed, each wife has her own personality.  They are bonded only by their dependence on the keeping of a dangerous secret and their hatred of the new wife.

I enjoyed this book.  It is a fast read.  There is explicit sexual content.  It is a cinematic look at life in contemporary Nigeria.

This is LOLA SHONEYIN’s first novel.  I look Forward to following her work.

Netflix is set to produce a series based on the book and for sure I will binge watch.

About Lola Shoneyin - from her publisher

Lola Shoneyin's work includes three books of poems, So All the Time I Was Sitting on an Egg (1997), Song of a Riverbird (2002), For the Love of Flight (2010), and two children's books: Mayowa and the Masquerade and Iyaji, the Housegirl.

Her debut novel, The Secret Lives of Baba Segi's Wives, was longlisted for the Orange Prize for Fiction 2011 and went on to win the PEN Oakland 2011 Josephine Miles Literary Award and the 2011 ANA/NDDC Ken Saro-Wiwa Prose Prize. Her children's book, Mayowa and the Masquerades won the 2011 ANA/ Atiku Abubakar Prize for Children's literature.

Shoneyin is the founder of the Book Buzz Foundation, Nigeria. She is also the director of Ake Arts & Book Festival which takes place in the third week of November in Abeokuta, Ogun State, Nigeria.

She lives in Lagos, Nigeria with four children, four dogs and one husband.