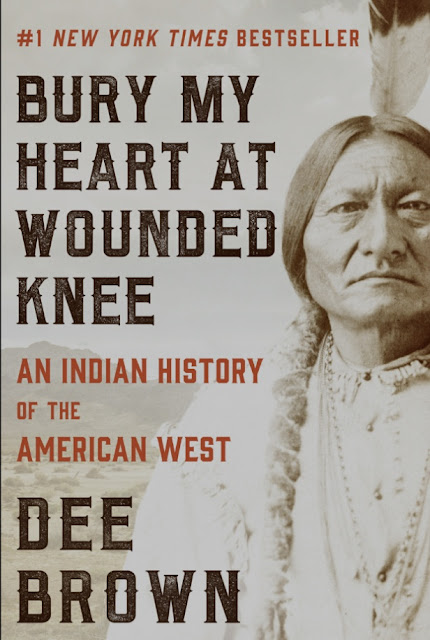 This book is credited with first bringing to wide public knowledge in America the devasting impact of the expansion of White Americans into states beyond the Mississipi River on the indegenous population. (Brown uses the terms “Indians” and “whites” as will  I)He also deals in less detail, as covered by other historians,  on the earlier Spanish Invasion.  His period of focus is 1860 to 1890.

In the 1950s I watched a lot of “Western” TV shows.  Indians were frequently portrayed as mercilessly killing by torture white women and children or enslaving them.  The most feared Indians were Apaches and above all Comanches.  There were occasional “Good Indians” like Tonto on The Long Ranger.  Never was there any suggestion of venality, deceit, and wanton slaughter by Calvary Units of women and children, including infants.

As Brown thoroughly showed me, in every case where the American government made promises by treaties  to Indians in exchange for giving up historic tribal lands these promises were broken.  Some few white Army leaders tried to keep promises but higher ups overruled them.

As the Civil War ended and the Gold Rush began the development of the railway system brought many more whites into land that Indians considered theirs.  Many Indian leaders realized they had little chance of beating the Americans but some did prefer to die fighting.  Indian leaders brought their people into forts to avoid starvation. In some cases they were imprisoned or slaughtered.

Brown details how diverse tribes did unite to field sizable armies but against the repeating rifles and heavy cannons of the Army they had little chance.  Once the Civil War ended the full American military power was turned on the Indians.

This book, even from fifty years ago, is absolutely essential reading for anyone with a serious interest in American history.

“Dee Brown, whose Homeric vision of the American West, meticulous research and masterly storytelling produced the 1970 best seller ''Bury My Heart at Wounded Knee: An Indian History of the American West,'' died at his home in Little Rock, Ark., on Thursday. He was 94. (December 12, 2002)

Mr. Brown was a librarian who was writing books after his children had gone to bed when ''Bury My Heart at Wounded Knee'' was published by Holt. The book, which sold more than five million copies, told a grim, revisionist tale of the ruthless mistreatment and eventual displacement of the Indian by white conquerors from 1860 to 1890.”

I just picked up a copy of this last year but haven't read it yet. And over the holidays I learned (or remembered?) that it was made into a film as well. Years ago. That makes me wonder if maybe it's one of those old-style documentary films, where they reenact things (sometimes they are unintentionally funny years after the fact), but hopefully not!