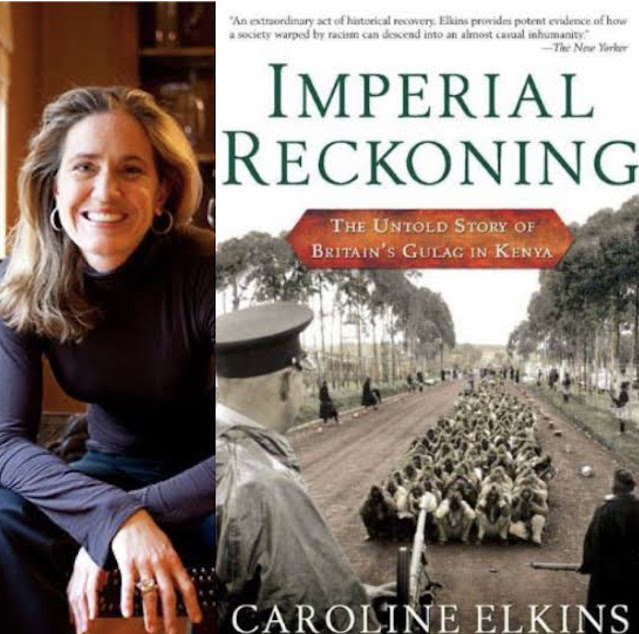 From the Pulitzer Award Statement

“Imperial Reckoning is history of the highest order: meticulously researched, brilliantly written, and powerfully dramatic. An unforgettable act of historical re-creation, it is also a disturbing reminder of the brutal imperial precedents that continue to inform Western nations in their drive to democratize the world.”

Imperial Reckoning:  The Untold Story of Britain’s Gulag in Kenya by Caroline Elkins deals with Britain’s response to an uprising by Native Kenyans, primarily of members of the largest ethnic group in the country, the Kikuyu, against British colonial rule. This savage response took the form of eight years of systematic murder, starvation,rape, slave labor, torture and confinement in barbaric camps which Elkins justifiably equates to the Germans in the Holocaust and the Gulags in Stalinist Russia.

To the British the Kenyans who fought for independence, the Mau Maus,  were not freedom fighters but savages, cannibal, rapers of white women.  The English employed Kenyans loyal to them as the foot soldiers in their fight against the Mau Maus.  They bribed them with extra food and gave them the land owned by insurgents. They had license to rape women considered anti English. The English were signers to post World War Two documents on basic human rights but there was no consideration to this at all.  The loyalist troops were lead by British officers, many of whom made sport of killing people with no proofs of any crimes.  Loyalist troops had free rein to rape the women of insurgents, as did many officers.  Often after a woman was gang raped she was murdered so she could no accuse anyone.

Elkins reveals what England under Churchill and conservative politicians wanted to conceal.  For eight years about 1.5 million Kikuyu, nearly the entire population were kept in detention camps behind barbed wire, guarded by Loyalist non-Kikuyu Kenyans seeking advantage and just delighting in their power.  Estimates of deaths are about 500,000.  Most of the survivors lost everything and had their health destroyed for their remaining life.  Women could often not give birth.

After around 1958 when progressive elements in English society became aware of this the authorities did their best to burn all documents related to their actions.

Caroline Elkins is an assistant professor of history at Harvard University. Conversant in Swahili and some Kikuyu, she has spent nearly a decade traveling and working in rural Africa. She and her research were the subjects of a 2002 BBC documentary entitled "Kenya: White Terror." This is her first book.

She lives in Cambridge, Massachusetts.

The Legacy of Violence: A History of the British Empire which traces 200 years of race based violence by England against their colonial subjects.

This is new to me: what an important and worthwhile investigation. Thank you for bringing it to my attention.