Caste: The Origins of Our Discontent by Isabel Wilkerson - 2020- 477 pages 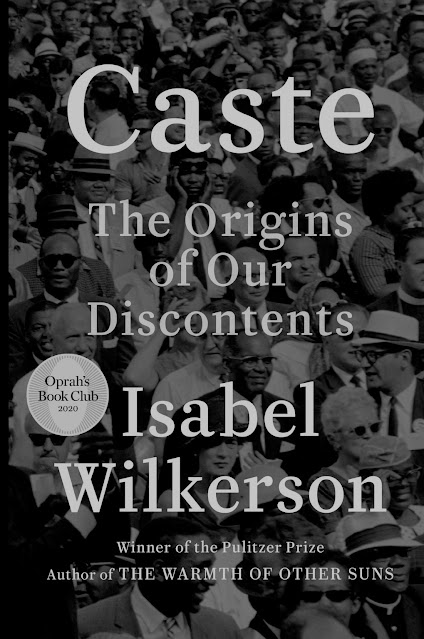 Caste: The Origins of Our Discontent by Isabel Wilkerson - 2020- 477 pages

I offer my great thanks to Alan u for the provision of an Amazon Gift Card that made it possible for me to read this wonderful book.

In August I read The Warmth of Other Suns- The Epic Story of America’s Great Migration by Isabel Wilkerson which told the story of the migration of millions of African Americans from the southern states to the big cities of the north and California.  I loved this book and knew I needed  to read her Pulitzer Prize winning Caste:  The Origins of Our Discontent soon.

Wilkerson focuses on those at the bottom and those in dominant castes in three societies, America, Nazi Germany and India.  In Nazi Germany Jews were in the bottom caste, those of so called Aryan roots, at the top.  The whole of German society came to revolve around an attempt to totally destroy those in the lower caste. Six million were killed.  In India, the caste system was very ancient, complex with thousands of caste and was sanctified by religion.  At the bottom were the “Untouchables”.  They were allowed only to do the lowest kind of jobs.  If even their shadow touched a higher class member, they polluted them.  In America Wilkerson breaks down a society with two classes, black and white.  After the end of slavery and the Reconstruction period in the Confederate States, “Jim Crow” laws were passed designed to keep formerly enslaved persons and their descendants “in their place”.  In this system a white man with no job and a long prison record living on public assistance could see himself as by caste  superior to a black Harvard scholar serving as President of the United States.  Wilkerson elaborates on the many lynchings of black men for “being uppity”.  Countless black men died from false accusations of rape by white women.  Just speaking to a white woman got many black men brutally murdered in unlawful public executions.

I was I admit shocked to learn that Nazi Germany modeled the laws designed to oppress Jews on American laws meant to keep African Americans from, this was their worst fear, from having children with white women.   Wilkerson goes deeply into how the belief in the American Caste system brought about the election in 2016 of Donald Trump.  In the poorest states like West Virginia and Kentucky white voters wanted in office a man who cared only about other super rich Americans.  She sees this as a backlash from much of white American’s  horror toward President Obama. They voted against a woman whose policies would have significantly helped them and their children because their only source of self pride was in being white.

Wilkerson, an African American, details her own experiences.  When she was working as a  reporter a powerful business man she was sent to interview refused to believe she was really Isabel Wilkerson of The New York Times.  In India people of Dalit ancestry told her she was an “American Dalit”.  Martin Luther King was told the same thing.

Wilkerson makes use of details about the lives of African Americans, Dalits and Jews in Nazi Germany as well as a great depth of scholarship to make her case.  She shows how the concept of “race” originated to Justify European exploitation and enslavement of people from Africa.

Wilkerson closes the book with an epilogue on steps to a caste free America.

This might well be the best work of narrative non-fiction so far written in this century.

All teachers of American history should read this book.  I wish all American politicians should be required to read.

This is narrative non-fiction as high art.

I sped through this so quickly that I didn't even count it as read, but it was just so unputdownable. She's so talented at the micro-level, assembling powerful sentences, and the macro-level, knowing just which of the millions of stories to select and present, to make the most profound case for her readers. Whatever she writes next, I'm so in!