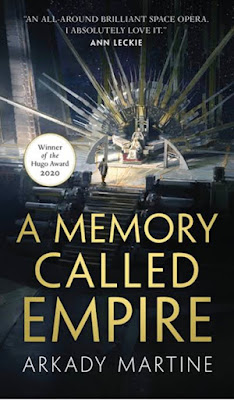 A Memory Called Empire by Arkady Martine completely fascinated me.  Martine has created an amazing world, a gripping space opera, full of lush images.  Martine even includes a glossery.

The central figure is an ambassador, from an independent Space station of maybe 30,000 people, to  the huge sprawling Teixcalaanli Empire.

The Teixcalaanli empire governs most of human space, and is about to absorb Lsel, an independent mining Lsel. Ambassador  Mahit Dzmare was sent to the imperial capital to prevent this, and quickly finds herself embroiled in the empire's complex intrigues.

Mahit has been implanted with an imago of the previous ambassador,a man who died under mysterious circumstances. (From the glossery- “imago—An ancestral live memory.”  Mahit finds it challenging blending her identity with a man.  She was selected for her position after extensive schooling in Teixcalaanli history, language, and literary culture going backs 1000s of years.  Almost every chapter begjns with a quote from a famous Teixcalaanli poem, work of history or official Manual. I loved these marvelously creative items which helped make the vast Teixcalaanli Empire come to  reality for me. (“Expansion History, The—A history of Teixcalaanli expansion, attributed to Thirteen River, attribution debunked; current literary scholars of Teixcalaan refer to The Expansion History as being composed by “Pseudo-Thirteen River,” an unknown person”.)

“Five Needle—Teixcalaanli historical figure, memorialized in the poem “Encomia for the Fallen of the Flagship Twelve Expanding Lotus.” Died defending her ship after a series of field promotions left her the ranking officer. Five Orchid—A fictional Teixcalaanli historical figure, the protagonist of a children’s novel, in which she was the crchesib of the future Emperor Twelve Solar-Flare.”

All the Citizens of the Empire (non-Citizens are called “Barbarians”) are linked together by device called a Cloudhook (from The glossery “cloudhook—Portable device, worn over the eye, which allows Teixcalaanlitzlim to access electronic media, news, communications, etc.; also functions as a security device, or key, which can open doors or give accesses; also functions as a geospatial positioning system, communicating location to a satellite network.”

Most imperial Citizens are humanoids, either male or female. The role of sexual identity and politics is an important and complex theme in Memory Called Empire.  Mahit has assigned to her an imperial civil servant whose job is to advance her understanding while keeping Mahit from finding out why her predecessor may have been murdered. The two women quickly bond.  They both enjoy, and I could use one also an, “ahachotiya—An alcoholic drink, popular in the City, derived from fermented fruit.”.  There are lots of food references.  (Lost Garden—A restaurant in Plaza North Four, famous for its winter-climate dishes.)

Martine acknowledged that she was inspired by Aztec culture (amalitzli—A Teixcalaanli sport, played on a clay court with a rubber ball which opposing teams attempt to throw, bounce, or ricochet into a small goal. Versions of amalitzli specialized for low- or zero-gravity environments are also popular”)as well as Byzantium and Roman history.

I highly reccomend this amazing book. The plot quickly intrigued me.

Her second novel A Desolation Called Peace, which won The 2021 Hugo Award for best novel takes place also in The Teixcalaanlian Empire now Under attack. I hope to read it next  Month.

“Arkady Martine is the author of the teixcalaan series, a multitude of short stories, and various other science fiction, fantasy, & horror. she is also dr. annalinden weller, who is a byzantinist, a climate & energy policy analyst, and a city planner. she is not bored, but she is often tired.” From The author’s website.