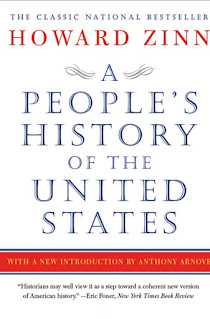 American history is traditionally taught as a story of heroic self-sacrificing leadership by great men, including no women or non-whites.  Zinn sees things very differently.  He very convincingly develops a very different account of an America in which the majority are emotionally manipulated to support policies that benefit elite wealthy rulers across political parties and no one else.

Zinn sees the American Revolution as only benefiting very wealthy slave owning land owners.  Ordinary soldiers fought because they needed food, because they were duped into believing it was a heroic cause.  Slaves were promised freedom by both sides for serving for them.  These were all lies.  Native Americans  mostly sided with the British, knowing white residents wanted them gone, either shipped out west or exterminated.  This is exactly the policy of all American presidents, treaties were made to get Native Land then broken when no longer convenient to wealthy landowners.

Zinn devotes much space to the developing of the railroads.  Railroad barons were given grants of millions of acres by political figures responding to bribes.  Congressmen got free passes.  Railroads made slave labor more valuable as cotton, tobacco and other goods could be shipped to markets.  Most ordinary Americans owned no land and no slaves.  Increasingly small land owners lost their property when they could not pay the mortgage to banks.  Developers bought their land and the former farmers became either share croppers or laborers paid hardly living wages.

The participants in the American civil war on both sides fell for the drum beats of patriotism.  The wealthy could buy their way out of military service.  Southern soldiers come across as complete dupes, owning no slaves  or land but seeing it as their duty to die for those who did while wealthy slave owners set the war out.  Zinn details how after the south lost, laws were passed to keep ex-slaves in subjugation.  Poor whites were made to think they were superior to African Americans and did not understand that the elite cared nothing for them.  Fraternizing between the races was not allowed.  Many ex-slaves were lynched  for just looking at white women.

As Americans factories and farms began to produce more than Americans could themselves consume American politicians became to seek to create an American Empire through wars with Spain and Mexico.  I live in the Philippines and was very glad Zinn went into the wars between Filipinos seeking freedom and the Americans, 1899 to 1903. Zinn estimates at least half a million Filipinos died as a direct result of the war.  African American soldiers often saw more of kinship with the Filipinos than white Americans.  The average American got nothing of benefit from the war, only the very wealthy who wanted it as a trading base with China.

World War One, as Zinn explains, was a terrible waste of Millions of lives.  No one benefited from it but Arms dealers and Wealthy Americans who supplied both sides.  Once American entered the war their was a huge wave of patriotic manipulation directed and building up enthusiasm for the war.

Zinn goes on into the World War Two era.  He acknowledges that there was a real reason for Americans to enter the war.  Not everyone will agree with his reasons for saying there was no need to use atomic weapons on Japan. He bases this claim on the fact that Japanese ambassador to Russia had basically agreed to surrender under the condition the Emperor stays in place.  American leadership refused this.

He goes into the Korean and Vietnam wars as well, ending with the Clinton era.

I found Zion’s claims totally convincing.  I urge all interested in American history to read A PEOPLE’S HISTORY OF THE UNITED STATES.

Howard Zinn was a historian, author, professor, playwright, and activist. His life’s work focused on a wide range of issues including race, class, war, and history, and touched the lives of countless people.

Zinn grew up in Brooklyn in a working-class, immigrant household. At 18 he became a shipyard worker and then joined the Air Force and flew bombing missions during World War II. These experiences helped shape his opposition to war and his strong belief in the importance of knowing history.

After attending college under the G.I. Bill, he worked as a warehouse loader while earning a Ph.D. in history from Columbia University. From 1956 to 1963, he taught at Spelman College in Atlanta, GA, where he became active in the Civil Rights Movement. After being fired by Spelman for his support for student protesters, Zinn became a professor of political science at Boston University, where he taught until his retirement in 1988.

Zinn was the author of dozens of books, including A People’s History of the United States, the play Marx in Soho, Vietnam: The Logic of Withdrawal, and SNCC: The New Abolitionists. He received many awards including the Lannan Foundation Literary Award for Nonfiction, the Eugene V. Debs award for his writing and political activism, and the Ridenhour Courage Prize.” From Howardzinn.org