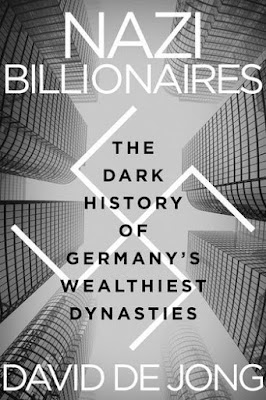 The biggest fear of wealthy Germans was the specter of communism.  Wealthy Germans were summoned to meetings where donations to the party was solicited by high ranking Nazis, sometimes by Hitler himself.  Per de Jong, most of the wealthy were very Anti-Semitic and relished the opportunity to take over Jewish assets.  Some fell under the sway of Hitler, others flattered and bribed him to gain contracts with the German military.  We also see how leading German banks were heavily involved, becoming ever richer.

“At the Esplanade dinner, Günther arranged his executives across fourteen tables, seating each next to a Nazi bureaucrat or general to discuss arms deals and Aryanizations. Naturally, the men who financed these transactions — the leading executives of Commerzbank, Dresdner Bank, and Deutsche Bank — were present. These financiers of the Third Reich competed bitterly to serve the deep-pocketed Nazi regime and to satiate their private clients’ ravenous appetite for credit.”

The industries owned by the dynasty families used slave laborers, concentration camp inmates and Russian prisoners of war.  This was  expedited by their close tied to the Nazi party and the SS. Many had S S officers in their employ.After the war, of course, claims were made that they had no idea of the horrible conditions those in their factories and mines labored.

With the defeat of Germany, numerous business leaders were arrested and tried.  Many got off by having their attorneys present letters exculpating them from wrong doing.  In the American controlled zone policy shifted against punishment for German business men. America wanted Germany as an ally in the developing Cold War with Russia.

De Jong goes into the reparation process.  This included reimbursement for the theft of Jewish assets and payment for  enslaved workers.  For a year in concentration camp you might get about $700.00.

To me the Porsche family came across very venal,  denying all blame.  Ferdinand Porsche did three years in prison while denying everything.  He even cheated the Nazis by overcharging them in the developing of the Volkswagen, one of Hitler’s pet projects.  Only 625 cars were produced by war end and all were given as gifts to Nazis.  Thousands of ordinary Germans paid for cars but never got them. Thousands worked as slave laborers in his factories.  During the war, he produced and designed tanks and military vehicles.

Descendants of the dynasty leaders are now among Germany’s richest people, worth billions of dollars.  Some of the grandchildren have acknowledged how the got this wealth and paid some reparations. Others say all criticism of them are politically motivated prevarications.

There is a lot of fascinating material about American pre-war attitudes.

David de Jong is a journalist who previously covered European banking and finance from Amsterdam and hidden wealth and billionaire fortunes from New York for Bloomberg News. His work has also appeared in Bloomberg Businessweek, the Wall Street Journal, and the Dutch Financial Daily.

Anyone interested in German history should read this book.