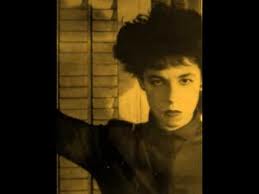 Jane Bowles, wife of Paul Bowles, was born in New York.  She published her only novel, Two Serious Ladies in 1943. She also wrote a play that was produced on Broadway, In The Summer House. She published  twenty short stories.   She moved to Tangiers with Paul Bowles in 1948.    While in Tangiers she is said to have had very intense relationships with a Moroccan woman and the famous torch singer Libby Holman.   She  was an alcoholic   Here is a quote from the book description of My Sister's Hand:  The Complete Works of Jane Bowles

"Though she wrote only one novella, one short play, and fewer than a dozen short stories over a roughly twenty-year span from the early 1940s to the mid-1960s, Jane Bowles has long been regarded by critics as one of the premier stylists of her generation. Enlivened at unexpected moments by sexual exploration, mysticism, and flashes of wit alternately dry and hilarious, her prose is spare and honed, her stories filled with subtly sly characterizations of men and, mostly, women, dissatisfied not so much with the downward spiral of their fortunes as with the hollowness of their neat little lives."

I confess I had never heard of her until I saw her name in the anthology, Object Lesson:  The Paris Review Presents the Art of the Short Story.  When I saw that Linda Davis greatly admired her work I was very happy to be presented with my first opportunity to read her work.   After reading the introduction of Davis I would say I would love to have had the opportunity to take a class in the short story from her.

I really love "Emmy Moore's Journal".   It is a partially autobiographical story about a woman who wants to join her husband.   The story is told in the first person and the woman's observations transcend the merely amazing, some are very accurate some make little sense as we she her thin grip on reality.  She has odd attitudes about Turkish women as somehow very exotic and feminine.  How things change as I suspect most Americans, the woman refers to herself as an American, would not list Turkish women as especially exotic.  There is little I can say about this story that Davis has not already said much better.   There is a letter to her husband (named "Paul") that is a classic.   It also shows the orientalizing in the mind of Emma of Asian women.  Here is what she says about herself "I am so wily and feminine that I could live by your side for a lifetime and deceive you afresh each day".   Femininity is equated with deception and uses the power tactics of the weak against their masters.

There is much more in this wonderful story.  Sadly none of her work, as far as I could find, can be read online.  My thanks Linda Davis for picking it.

If you have read Jane Bowles (or Paul, who I will post on soon as this story made me curious about him) please share your experiences with us.

I thought Two Serious Ladies was absolutely brilliant - quite like Muriel Spark, in some ways - and I reviewed it here, if you want to read more: http://stuck-in-a-book.blogspot.co.uk/2011/10/two-serious-ladies-jane-bowles.html

I have her short stories on my shelf, waiting to be read - this one sounds like it'll be wonderful.

Despite her relatively small output, Jane Bowles ranks up among my very favorite American authors. I have read Two Serious Ladies more times than I can count, but should revisit her stories. She's an original - with a brave, oblique, idiosyncratic and worldly view of the sort I've rarely found in other American writers. I hope you'll post about more of her work!