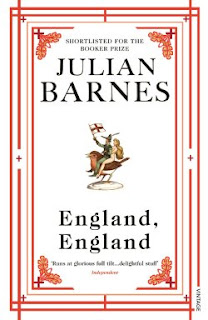 I am very glad England, England was not my first Julian Barnes (1946, UK) novel because if it was it would have been my last one and I would have been deprived of the very real pleasure of reading three much better novels by Barnes.   In order of preference my favorite Julian Barnes novels are Arthur and George, Flaubert's Parrot and A Sense of an Ending.   Before I read England, England  I planned to read all of his novels but I do not think I will be reading any more near term.   I do not desire to write long posts about books I do not like and I checked the Amazon reviews on this book and they were all pretty negative, some were really vicious.

The main plot is supposed to be about a hyper wealthy Englishmen who plans to build a mini-amusement type replica of England on The Isle of Mann for tourists.   Some of the book is taken over with talking about the plans for this and far to much of it to a totally uninteresting  romance between two of Sir Jack's employees.

Barnes's other books were much better and maybe this is his worse.  I do not endorse this book to anyone other than someone determined to read all of the novels of Barnes.

Sorry to hear you didn't like it. I have Arthur and George with me. I'll avoid this then.

Thanks for your honest review. I am not familiar with this author's work.