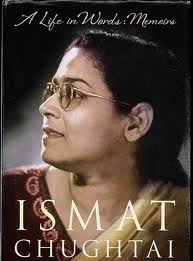 1915 to 1991
Mumbai, India
Short Stories of the Indian Subcontinent
A Reading Life Project

Prior Posts on Banned Books Week

Today is the last day of Banned Books Week, now in its 30th year.    This was my first year observing Banned Books Week, a world wide event initiated by the American Library Association.   As one might expect, it is a very America centered event with most participants talking only about American books that were banned in the USA for reasons of prudery, racism and political correctness.   I am observing the week by posting five guests posts, courtesy of Open Road Media, from distinguished authors talking about Banned Books.  In addition to this I have posted this week on a short story by two writers whose works were banned for  long periods, Franz Kafka and Zora Hurston.  Today I will post briefly about a story by Ismat Chughtai, one of the foremost 20st century Urdu short story writers.  Her work was banned for a long time in India, Pakistan and in Islamic theocracies (and probably still is) as too radical in its treatment of women and for its open treatment of sexuality.  The stories seem like the mildest of works now to me but that her stories once were so controversial shows the changing of the times.   She was considered a great champion of the rights of women, which is probably what got her in trouble!

Her most famous story by far is "The Quilt" (there is some background information on her in my post on this story) which has very deeply veiled reference to a lesbian relationship, something punishable my death under Islamic law.  (She was a Muslim but she stayed in India after the 1947 partition.)    Of the two stories of Chugati, I found "Housewife" the more interesting.   The story is set among ordinary people in Mumbai.  (I have an attraction to stories and novels about Mumbai/Bombay as I have many wonderful readers who live there).    There are two central characters, Mirza who owns a small shop and his maid, who becomes his wife, Lajo.   I wonder how many millions of women in India had life histories like this:

"Lajo was an orphan.  She was abandoned on the streets by unknown parents.  She lived by begging and snatching a living from garbage until she grew into a shapely an attractive woman.  "Youth etched her body into  bewitching curves and this became her only asset   The street intitiated her into the mysteries of life.   She never haggled   If it was not a cash down proposition, it would be sex on credit.  If her lover had no means, she would even  give herself for free".

No one ever taught her any sense of religious morals, she felt no shame at all.  As she aged she became a maid and all of her masters ended up having sex with her, beating her and then throwing her out, maybe for fear their wives would find out or from shame.  She was almost certainly of the Dalit (untouchable caste) and to have sex with her was a source of great blame for those in higher castes.  It is my understanding that it was, and for all I know still is, a common practice for Brahmins to take Dalit women as mistresses or seek them out as prostitutes, maybe this way they avoid bring shame on higher caste women.  Anyway one day Mirzi's friend brings over Lajo and tells him she should hire her as a maid.  He sees her as a "slut from the street" and at first he does not want her in the house but she offers to work for nothing but some food and a place to stay.  It turns out she is a marvelous cook and a great housekeeper and manages the kitchen budget with total honesty.   She is confused that Mirzi does not want to have sex with her, all the other men she has worked for have been very eager for this.   One day Mirzi succumbs, we knew he would!   He really enjoys having Lajo in his house, he likes her food and he relishes her shapely body and the sexual skills life on the streets taught her.   I will tell a bit more of the story as It will be hard, I think, for most people to read this.  Against the advise and strong wishes of his family, his mother is outraged, he marries her. Now she begins to wonder why he never beats her like a husband should.   He does at last beat her and now she feels like she is truly his wife.   Other men she has worked for loaned her out to their friends but Mirzi is very possessive of this and she likes that.

This story gives us a good look and life in Mumbai.    Under it all, it is a story of caste issues, heartbreaking poverty and a society which throws out female children.  I really liked it alot and I think anyone who reads it will also. I know it sounds wrong to say this, but it was told with a lot of humor.  I read this in a very good anthology of Indian short stories, Best Indian Short Stories, edited and introduced by Khushwant Singh.   You can download a sample of the book from Amazon which will allow you to read the very interesting introduction and see all the stories in the book.  I bought it and I almost never buy any books.

It was translated from Urdu by Fatima Ahmed.

I was able to purchase this book through the generosity of Max u in providing me with an Amazon gift card.

I will be posting on a good number of stories from the anthology by Singh.

If you know the exact publication history of this story, please leave a comment.  My publication date for it is an estimate.  If you know where more of her work can be read online, please let us know