"The Shrine" by Kirstin Zwang Can Be Read Here
One of the best sources of information about contemporary, especially very recent, short stories is The
Thresholds Short Story Forum on Face Book.  To join just make application.  The only real restriction is that you not advertise your own work.  On the Threshold Forum you will get the latest news about award winning stories.  It was in the forum I became aware of the recent multiple prizes won by Kirstin Zwang.
Harper's Bazaar", probably the world's most prestigious fashion magazine (or so my daughter who just received her B.A. In fashion design and marketing tells me) was once a leading publisher of short stories.  Happily it looks like the editors have decided to honor this tradition by sponsoring  an annual short story contest.  "The Shrine" by Kirstin Zwang is the 2015 first place story.  My compliments to the Judges and Harper's Bazaar for selecting such a great short story.
"The Shrine" castes a hauntingly beautiful, deeply sad, almost hurtfully powerful spell with its treatment of the impact of World War Two on life in a small remote Japanese village.  The understated conclusion is so subtle but once I grasped, I hope, the implications of what happened I was truly mesmerized.  I have been reading on and off in Japanese literature for nearly six years.  Only in the early stories of Kenzaburo Oe do I find as powerful evocation of the devastation of Japanese culture that the war brought down on the ordinary people of the country. People in remote Japanese communities knew only what the government, under the God Emperor told them, that for no apparent reason vicious foreigners were attacking the mother land.
I will just tell the bare outlines of the story as I do not want to deprive potential readers of their first encounter pleasure.  I read the story three times and it would repay several more readings I am sure.
The story, set on a remote small Japanese Island, centers on Norika.  When we meet her we learn her father desperately seeks a man to adopt in the family, she is his only child, to marry his daughter Norika and assume his name.  Single men, in fact any man, are hard to find.  Boys as young as five-teen are being drafted into the navy.  He finds a marriageable young man who was rejected by the military due to a problem with his eyes.  He is an honorable hardworking man.  I will not spoil the tale of the marriage.
You may have seen old World War II movies set in England or the USA where a very dreaded figure is the man, often on a bike, delivering a telegram advising the family of a member killed in the war (long ago one of my Grandmother's got such a telegraph about an uncle I never got to know) The town clerk, Norika helps in his office, delivers sometimes two or three of these, they were edged in black, telgraphs a day.  I felt terrible sadness when children talked about how their fathers and brothers would need to use the beached fishing boats when they returned.
Zwang's prose is just exquiste.  The island should be a beautiful peaceful place of tranquility over arched with deeply spiritual traditions about the holiness of life, not what the war has made it, the waiting room in a charnel house.
I do wish to give a bit of a feel for the shimmering prose of Zwang, her feel for nature which echoes ancient Japanse traditions.  Just look at all the images in lines
"She pulled back the wooden shutter. The light was soft, but there was no sign of rain.
In the yard stood a cherry-tree, a common Yoshino.  The last of the blooms had long wilted.  In the summer months the cicada larvae would slowly climb the trunk and begin their metamorphosis, their wings becoming transparent and their song growing more raucous by the day.  But who could deny them their song? In one short week they would be dead.   She thought of her husband, lying with his poor, strange eyes closed, in the acolyte’s arms. He made no sound as they laid him out on the matting before the shrine. The two had sat with him all through the night, for she had no other family to support her. The doctor attending a birth further up the mountain arrived as the body was already growing cold.  Of course, the acolyte had undergone his own metamorphosis by then. He no longer wore a saffron robe, or sat beneath the spreading branches of the paulownia-tree in contemplation, instead he bent his shorn head over a ledger, writing out the names of the war dead.." 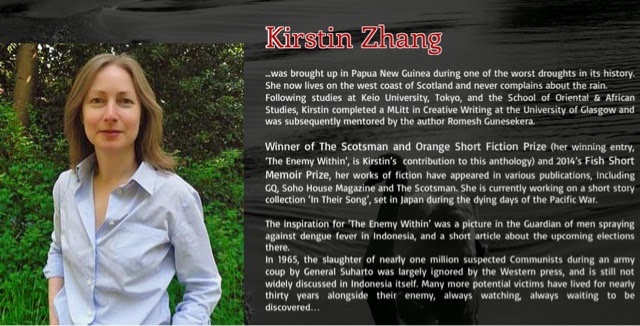 I have links to two more stories by Zwang and I hope to read and post on them both in May.  I eagerly await her collection of short stories set in Japan in the final days of World War II.