Yiyun Li on The Reading Life 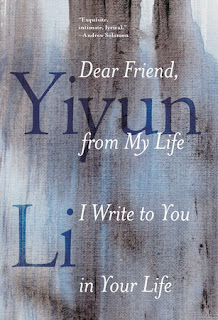 Yiyun Li is one of my favorite contemporary writers. I have read and posted on her novels, The Vagrants and Kinder Than Solitude and several of her wonderful short stories.  I was honored to be given a review copy of her latest book, a collection of essays centering on the central place of reading in her life.  One of the greatest values of the reading life is  it can give you a reason to keep going when life seems pointless.  On the deepest level Dear Friend, From My Life I Write to You in Your Life can be  seen as a reflection on how her love of reading kept her from committing suicide.  One of her most loved authors, William Trevor, with whom she has visited, just died recently and I know how sad this must have made Yiyun Li.  She also, as do many writers, greatly admires Katherine Mansfield.  She talks about her memories of her trip to Ireland.There is a very powerful chapter on suicide as a public act.  She speaks elegantly about the challenges in writing in English versus her birth language Chinese.

Dear Friend, From My Life I Write to You in Your Life is a profound work on the reading life, deeply felt.  It includes  a very interesting list of books mentioned. 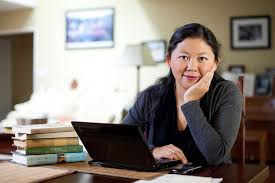 Yiyun Li grew up in Beijing and came to the United States in 1996. Her debut collection, A Thousand Years of Good Prayers, won the Frank O'Connor International Short Story Award, PEN/Hemingway Award, Guardian First Book Award, and California Book Award for first fiction. Her novel, The Vagrants, won the gold medal of California Book Award for fiction, and was shortlisted for Dublin IMPAC Award. Gold Boy, Emerald Girl, her second collection, was a finalist of Story Prize and shortlisted for Frank O'Connor International Short Story Award. Kinder Than Solitude, her latest novel, was published to critical acclaim. Her books have been translated into more than twenty languages.
Yiyun Li has received numerous awards, including Whiting Award, Lannan Foundation Residency fellow, 2010 MacArthur Foundation fellow, 2014 Benjamin H. Danks Award from American Academy of Arts and Letters, 2015 Sunday Times EFG Short Story Prize, among others. She was selected by Granta as one of the 21 Best Young American Novelists under 35, and was named by The New Yorker as one of the top 20 writers under 40. She has served on the jury panel for Man Booker International Prize, National Book Award, PEN/Heminway Award, and other. She is a contributing editor to the Brooklyn-based literary magazine, A Public Space.
She lives in Oakland, California with her husband and their two sons, and teaches at University of California, Davis.  from yiyunli.com

Her work sounds truly wonderful. I will keep it in mind for the future.