The Romanovs by Simon Sebastian Montefiore (2016) 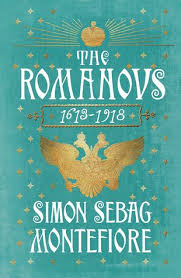 The Romanovs by Simon Sebastian Montefiore is an entertaining account of Russian dynastic history of the Romanovs from 1613 to 1918 when they were overthrown through the Russian Revolution.  Monteforie has written a kind of National Enquirer scandal driven top down history of Russia.  It is a story soaked in blood and semen.  Nearly all the rulers were paranoid murderers given to sexual excesses of various sorts.   One of the biggest problems in imperial dynasties was succession, this
was magnified in a family in which generations of marrying in a small pool had produced many men unfit to rule.  Several rulers took the throne as young boys, a large number of the emperors were killed to remove them.  Montfiore goes into great detail on the sex lives of the monarchs, women as well as men.
The book is kind of one scandal after another, murders, treachery, after a while it became a bit repetitious. The footnotes are often the most interesting parts of the book, being rich in detail.  I think most into Russian history will already know much of the broader outlines of the Romanov story.  Montefiore has a deep and profound knowledge of Russian history.  His account of the murder of Rasputin and Czar Nicholas and his family was very dramatic. Of the few "good emperors" they were so only in comparison with monsters. He makes some interesting points about the nature of rule by tyrants.

I was given a review copy of this book.  I was glad I read it.  A knowledge of Russian history in important for literary and history autodidacts.
It is not meant to be a social history of Russia.
The book gives little notion how the nonroyal people lived, in fact little is told about the day to day life of the royals.

Email ThisBlogThis!Share to TwitterShare to FacebookShare to Pinterest
Labels: Russia