French Literature and History on The Reading Life

My Posts on Anka Muhlstein 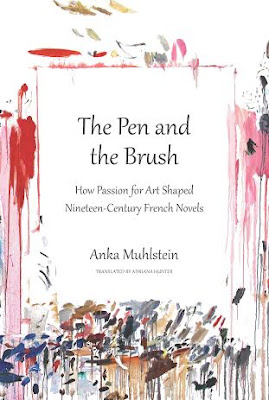 Balzac's Omelette and Monsieur Proust's Library both by Anka Muhlstein are as delightful a pair of books as one can find on French Literature.   Her new book, The Pen and the Brush How the Passion for Art Shaped Nineteenth Century French Literature is a wonderful account of how their experience of painting influenced the giants of French literature, Balzac, Flaubert, de Maupassant, Zola, and Proust.

Mulhstein details the ways the authors encountered art, the depiction of painters in their work, and the influence different painters had on their literary methods.  Starting with Balzac, where else could one begin, she talks about the most featured painters in the Comedie Humaine. I am currently working on a read through of this and as a first reader it is hard for mr to keep track of all the times a painter appears in the full works.  Muhlstein very interestingly explains how Balzac's style was influenced by the painters he admired.

One of my favorite works by Emile Zola is The Drinking Den.  I love the hilarious scene when the family of a young Nana make an outing to the Louvre.     As the book progress in time through the 19th century up to the cross century Proust,  we see different painters come into fashion and how each writer had their own favorites.

i will, I hope, be reading in this field for year to come and this book will increase my appreciation of the great power of these writers.

Muhlstein is very deeply read and has a profound knowledge of the visual arts.  Her work will be of value to everyone from those with advanced degrees from the Sorbonne in 19th century French literature to general readers.  Her style is charming and her manner warm.

I highly recommend a visit to the publisher's web page, Other Press.  They offer an elegantly diverse selection of works. 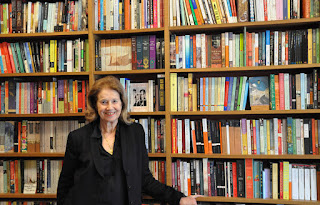 Anka Muhlstein is the author of biographies of Queen Victoria, James de Rothschild, and Cavelier de La Salle; studies on Catherine de Médicis, Marie de Médicis, and Anne of Austria; a double biography, Elizabeth I and Mary Stuart; and most recently, Balzac’s Omelette and Monsieur Proust’s Library (Other Press). She won the Goncourt Prize for her biography of Astolphe de Custine, and has received two prizes from the Académie française. She and her husband, Louis Begley, are the authors of Venice for Lovers. They live in New York City  - from the publisher webpage