A Great Improvisation: Franklin, France and The Birth of America by Stacy Schiff, 2005,528 pages. 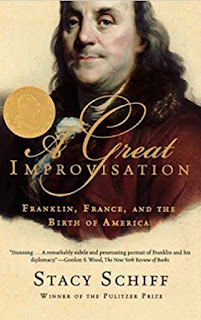 The Treaty of Paris formalized the end of British rule in Americs.  Negotiations began in the spring of 1782 and concluded on September 3, 1782.  Franklin was the lead representative for the United States, along with John Adams and was a signatory to the treaty.  The United States received very favorable  terms, much to Franklin's diplomatic skills.


Not long ago I read Ron Chernow's magnificent biographies of Alexander Hamilton and George Washington.  From this I developed an interest in learning more about the era of the American Revolution.  I am partial to biographies.  Upon checking on Amazon I discovered Stacy Schiff has a work on Benjamin Franklin focusing on his time as the minister plenipotentiary from the United States to France.  I previously greatly enjoyed her  biography Véra (Mrs. Vladimir Nabokov), which won the 2000 Pulitzer Prize in biography, as well as her biography of Saint-Exupéry.  Given this I felt comfortable acquiring her A Great Improvisation: Franklin, France and The Birth of America.  On a personal note, Franklin was seventy when he crossed the Atlantic, "In December 1776, a small boat delivered an old man to France. Typically after an ocean crossing his eyes brimmed with tears at the sight of land; he had just withstood the most brutal voyage of his life. For thirty days he had pitched about violently on the wintry Atlantic, in a cramped cabin and under unremittingly dark skies. He had barely the strength to stand, but was to cause a sensation.... America was six months old, Franklin seventy years her senior. And the fate of that infant republic was, to a significant extent, in his hands.". I am two years older than Franklin was when he landed and need a bit of encouragement now and then.  I certainly got it from Schiff's book.

As the work opens we are on a coach with Franklin and his grandson bound from the port to Paris.  The road is rough, Sciff made me feel like I was along for the ride.  We see the striking contrast between the much cleaner Philadelphia and Paris where a stroll is hazardous to your safety and your wardrobe.  Franklin gets a super star reception as "the man who tamed lighting".  His mission was to get French to help the United States in the revolution.  The American army was short on everything.  Franklin had great charm and was perfect for this job.  He was a great success.

Schiff introduces us to lots of characters, some honourable some not quite but all very interesting. Franklin stayed at the estate of a nobel, enjoying a good life.  He became involved in the social life around him Franklin, two years a widower, liked French women, he only encountered aristocrats, and many were more than curious about him.  He had relationships but we really don't know how far they went.

French politics was very complicated.  Franklin also had eventually to deal with other Americans, prominent among them John Adams. Lafayette played a very important role in France's role in the war and we learn a lot about him.

I really enjoyed this book.  I recommend it to anyone interested in the founding of America.

About Stacy Schiff
Stacy Schiff is the author of Véra (Mrs. Vladimir Nabokov), winner of the Pulitzer Prize; Saint-Exupéry, a Pulitzer Prize finalist; and A Great Improvisation: Franklin, France, and the Birth of America, winner of the George Washington Book Prize and the Ambassador Book Award. Schiff has received fellowships from the Guggenheim Foundation, the National Endowment for the Humanities, and the Center for Scholars and Writers at the New York Public Library. The recipient of an Academy Award in Literature from the American Academy of Arts and Letters, she lives in New York City. .from Amazon