Candide by Voltaire - January, 1759 - translated from French by Philip Littrel 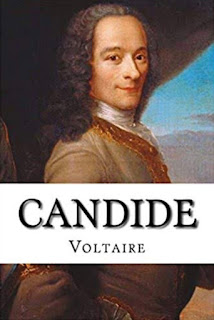 "All that is very well," answered Candide, "but let us cultivate our garden."

Candide played a very important part in my development as a reader.  In 1960, I was thirteen, I acquired a copy of a book that still shapes my reading life, The Lifetime Reading Plan by Clifton Fadiman.  I don’t recall how this came into my hands but it was like a revelation to me of something no one had ever told me before.  I had been an avid reader since about six.  I had no internet to guide me, no adults to lead me.  I just read at random mostly from the school library.  Now I was told by Fadiman that some literary works are immortal classics to nourish you for a lifetime,some books are great, that reading can enrich your life.

I began to read one of his selections, Candide, guided by his short note.  A lot of the items on the list were very long and sounded scary when Fadiman said I might have to read seriously for a long time before I could appreciate them.

I saw somehow there was a wisdom in this book way beyond my years and the things I was told by adults.  Fadiman explained to me that Voltaire was “the uncrowned king of intellectual Europe,the most destructive of the sappers of the foundations of the old Regime destroyed by the French Revolution.”  I knew nothing about what this meant but I hoped  one day I would.  I am sure I had never before read a work not originally written in English and for sure not one written in the 18th century.  Something amazing and terrible happened in every short chapter.  Lots of sex followed by the pox (what was that Pangloss, Candide’s teacher was doing in the bushes with a servant girl).

Adults are horrible monsters, only Candide and his lady love are innocent.  He travels all over the world, everywhere weird things happen, people thought murdered reappear. There is a cool chapter I bet Voltaire loved writing trashing literary critics.  Who can argue with this council Candide was given.

“A million regimented assassins, from one extremity of Europe to the other, get their bread by disciplined depredation and murder, for want of more honest employment. Even in those cities which seem to enjoy peace, and where the arts flourish, the inhabitants are devoured by more envy, care, and uneasiness than are experienced by a besieged town. Secret griefs are more cruel than public calamities. In a word I have seen so much, and experienced so much that I am a Manichean."

Of course I must have wondered in 1960 what in the world a Manichaean was and why they were despised by the church.  Speaking of which the Catholic Church from the Pope on down comes in for some serious trashing as do Muslim clerics.

There are references to current events such as an Earthquake in Lisbon.

All this in a work I could read in under three hours. I have read it several more times but not since I began my blog July 7, 2009.
I was pleased it all came back to me. I wanted Voltaire on The Reading Life.

I knew after encountering Voltaire all works are not equal.  A vast world opened up to me, one I am still journeying as I can.

My thanks to Monsieur Voltaire and Mr. Clifton Fadiman.