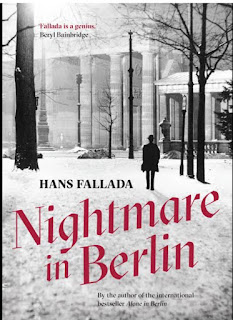 During German Literature Month in 2015 i read two novels by Hans Falada, Wolf Among Wolves and Every Man Dies Alone.  Promo Levi said Every Man Dies Alone was the greatest work on life in Nazi Germany.  In 2016 I read his A Small Circus, in 2018 Once a Jail Bird (Fallada spent several years in jail).

Nightmare in Berlin was his final novel, set in Berlin starting with the arrival of Russian troops in Berlin.  From this point it follows lives of a married couple as they try to restore their pre-war life.

Nightmare in Berlin is closely based on his life with his wife in the closing days of the war and a year or so on.  Like the lead character, Doll (ok the name irritated me), Fallada was made mayor of a small town by Russians and his wife was a heroin user.
Doll encounters lots of ex-Nazi party members but nobody will admit they liked Hitler.  Doll and his wife return to Berlin but there old apartment is occupied by others.  They seek medical help in a broken down system.  Everyone in the book desperately wants American cigarettes. Everybody drinks heavily and seeks drugs to dull the pain.

Berlin truly is a nightmare City.  Everyone is constantly hungry, everyone is crooked.

The Review in The Guardian said this was a very poorly translated book. The reviewer laughs at the work of the translator.

Start Fallada with Everyman Dies Alone then decide if you want to read more.

“Before WWII, German writer Hans Fallada's novels were international bestsellers, on a par with those of his countrymen Thoman Mann and Herman Hesse. In America, Hollywood even turned his first big novel, Little Man, What Now? into a major motion picture

Learning the movie was made by a Jewish producer, however, the Nazis blocked Fallada's work from foreign rights sales, and began to pay him closer attention. When he refused to join the Nazi party he was arrested by the Gestapo--who eventually released him, but thereafter regularly summoned him for "discussions" of his work.

However, unlike Mann, Hesse, and others, Fallada refused to flee to safety, even when his British publisher, George Putnam, sent a private boat to rescue him. The pressure took its toll on Fallada, and he resorted increasingly to drugs and alcohol for relief. Not long after Goebbels ordered him to write an anti-Semitic novel he snapped and found himself imprisoned in an asylum for the "criminally insane"--considered a death sentence under Nazi rule. To forestall the inevitable, he pretended to write the assignment for Goebbels, while actually composing three encrypted books--including his tour de force novel The Drinker--in such dense code that they were not deciphered until long after his death.

Fallada outlasted the Reich and was freed at war's end. But he was a shattered man. To help him recover by putting him to work, Fallada's publisher gave him the Gestapo file of a simple, working-class couple who had resisted the Nazis. Inspired, Fallada completed Every Man Dies Alone in just twenty-four days.”

I've not read either the review or the novel, but it does seem a little extreme for any reviewer to *laugh* at the work of a translator. Sheesh. (Also, a little ironic, as the novel itself was written so quickly - in just twenty-four days? - that surely someone else could poke at that too.)