The River Capture by Mary Costello - 2019 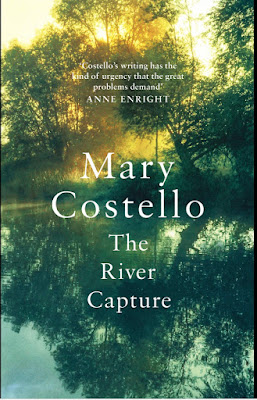 My Q and A Session with Mary Costello

In March of 2013 I read and posted upon Mary Costello's debut collection, The China Factory.  I am delighted to be today featuring her second novel, River Capture. Set mostly in Waterford, Ireland, the river is the Sullane.

The theoretical model behind my blog calls for me to focus on literary works about people who lead reading centered lives. River Crossing is a brilliant example of such a work. The central character Luke O'Brien is obsessed with Leopold Bloom from Ulysses.  He has just returned from Dublin where he was teaching Joyce.  He often reacts to passing events by wondering what Leopold Bloom would do under the same circumstances.  He seems to have both Ulysses and Portrait of the Artist as a Young Man so well internalized that segments enter his consciousness through out his day as involuntary memories.  He sees himself in terms of his relationship to Joyce and his work.  He has vague plans to write a book on Joyce now that he is back on the family farm.  There are lots of quotes from Joyce and even references to Richard Ellman's biography.

Luke is kind of at odds as what to do with his days.  Much of his time is spent visiting his Aunt Ellen, his only living relative besides a sister in Australia.  He seems slightly unhappy.

Luke has had a gay relationship as well as one with a woman, both way in the past but he thinks about them a lot.  He is lonely but he is used to that.

One day a woman comes to his farm and asks him to adopt her uncle's dog. They gradually develop a relationship. Ruth brings a much needed element of chaos into Luke's life.

As the plot reaches about midpoint Luke's mind takes on an almost Joycean synsesis of human culture.  The language is exquisite.

Irish romantic relationships are stereotypically portrayed as restrained, we see into and beyond that in the evolving relationship of Luke and Ruth.

This is very much a set in place story, deeply rooted in Ireland.

"Mary Costello lives in Galway. Her short story collection, The China Factory (2012), was nominated for the Guardian First Book Award and shortlisted for an Irish Book Award. Her first novel, Academy Street (2014), won the Irish Novel of the Year Award at the Irish Book Awards and was named overall Irish Book of the Year. It was serialised on BBC Radio 4’s Book at Bedtime and was shortlisted for the International Dublin Literary Award, the Costa First Novel Prize, the EU Prize for Literature and the Prix Littéraire des Ambassadeurs de la Francophonie en Irlande, and has been translated into several languages. The River Capture is her second novel."