At the Side of the Road’ - a short story by Ethel Rohan. - from From issue #4: spring/summer 2017 Banshee Press 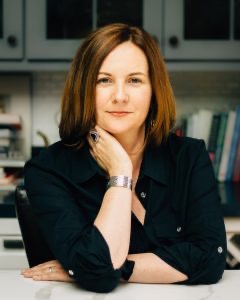 My thoughts on Ethel Rohan, from March 2014

Since I wrote this Rohan has published three collections of short stories, a memoir about Dublin and a highly reviewed debut novel, The Weight of Him.

My purpose today is to let my readers know another Ethel Rohan short story maybe read online and to keep a record of my readings of her work.

In just a few sentences we learn a lot about the subject of the story:

“Cissie Murray sold Wexford potatoes and strawberries by the dual carriageway, under a grey-white awning she pretended was a fancy marquee. For every hundred cars that passed, maybe one stopped. Meanwhile, Cissie held hard to her phone—texting friends, playing games, and bopping to music with frantic rhythms. For this, Dan Topher paid her thirty euro a day.

This Friday, Cissie had forgotten her phone at home. She felt clammy and irritated, her hands, her head, having little to do. For hours she hummed songs to herself, watched greenflies race over the strawberries, and haggled with a few customers, all wanting something for nothing.”

Of course a young woman standing beside the road all day has to be wary of attracting the attention of men wanting  something more than potatoes or strawberries.  It was fun to see her ward of one man with a golf club, we admire her fierce pluckiness.

We learn a bit about her family, her past relationships and go on what at first seems like it might be a movie day date which goes badly.

We see Cissie’s expectations are not very high.  Like many in the often set in Ireland short stories of Rohan, it deals with the life of a woman struggling to get along in a challenging environment.

I am greatly looking forward to reading Ethel Rohan’s fourth collection of Short Stories, In The Event of Contact, forthcoming in the spring of 2021. 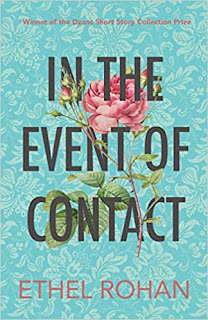 “In the Event of Contact chronicles characters profoundly affected by physical connection, or its lack. Among them, a scrappy teen vies to be the next Sherlock Holmes; an immigrant daughter must defend her decision to remain childless; a guilt-ridden woman is haunted by the disappearance of her childhood friend; a cantankerous crossing guard celebrates getting run over by a truck; an embattled priest with dementia determines to perform a heroic, redemptive act, if he can only remember how; and an aspirational, angst-ridden mother captains the skies.

Amidst backgrounds of trespass and absence, the indelible characters of In the Event of Contact seek renewed belief in themselves, recovery, and humanity.”  From Goodreads.

Mel, you are a connoisseur of short stories! As you know you introduced me to the work of Ethel Rohan several years ago. I'm happy that she has a new collection of short fiction in the works. Interesting post!